I took Eric’s invitation to join him for some early morning trail riding up in Lake Murray State Park. It was a kind of still and steamy hot, and we both were chewed on by chiggers.

Eric made an underbiking comment about “bringing a knife to a gunfight”. Evidently, he is a skillful knife wielder. As usual with photos and videos, it his hard to appreciate the severity of the terrain. Where are all the steep slopes? What happened to all the rocks, roots, and ruts? They most certainly were there, and Eric did a great job of picking his lines. It was probably his smooth, effortless style that made it look so easy.

I plan to return to these trails. But next time, I’m bringing overwhelming fire power against those chiggers.

In north central Texas where I live, summer overnighters are much tougher than those in winter. But they must not be left undone.  Here’s a summary of this one…

Sometimes the difference between bitter regret and sweet satisfaction is the ability to quickly formulate a backup plan. 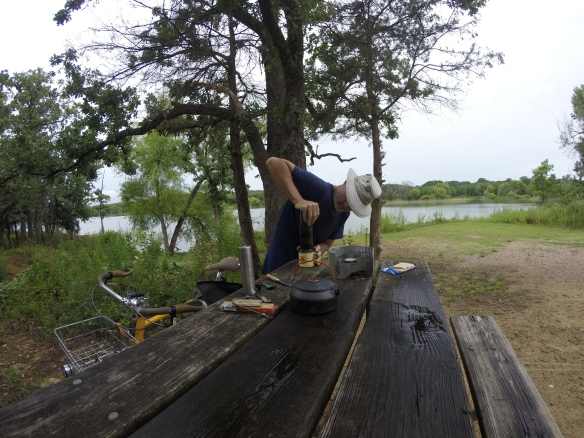 When life circumstances come and crush your plans, can you analyze the new constraints and find another way?

Maybe it is best not to dwell on an opportunity lost…

…but instead develop the mental agility to maximize the opportunity that remains.