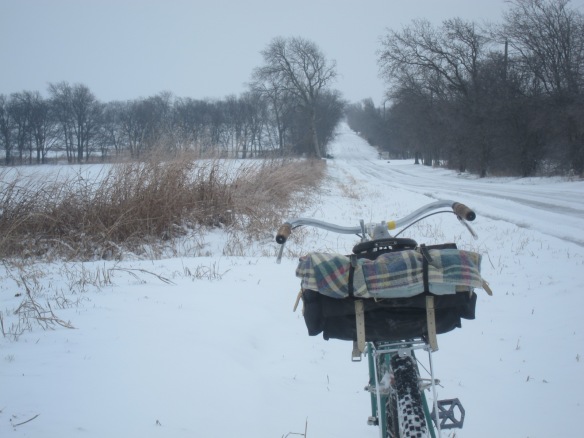 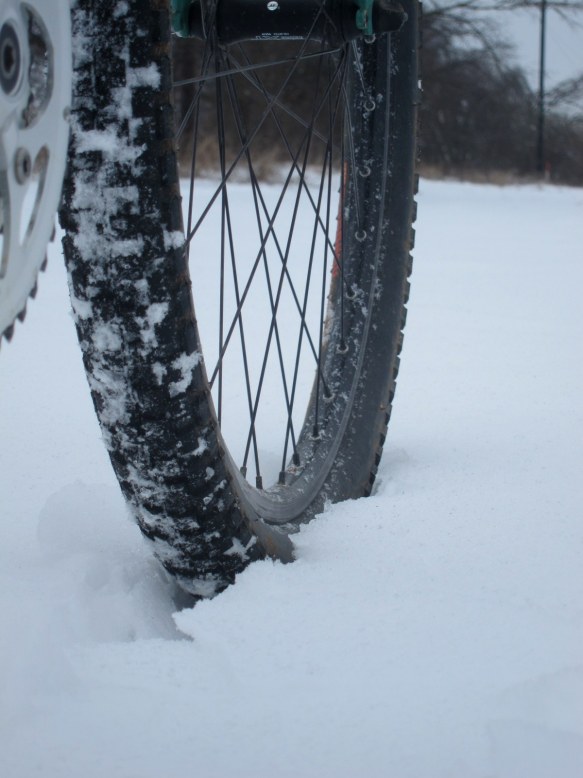 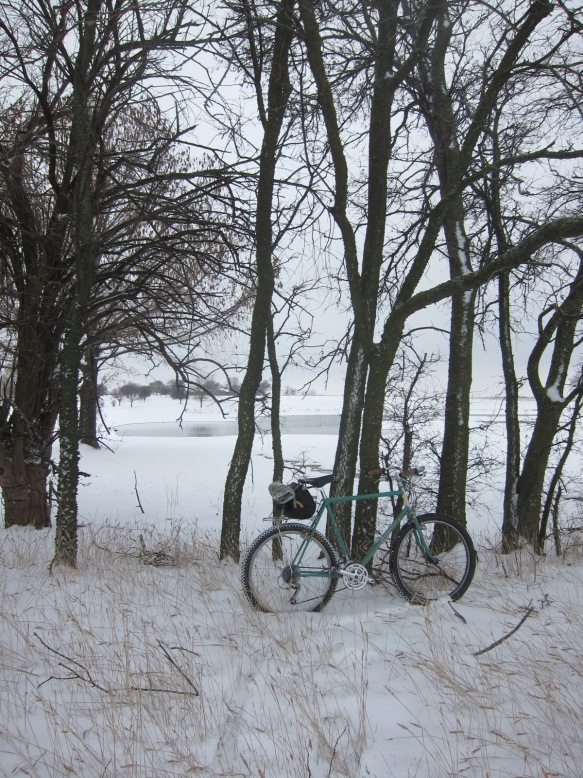 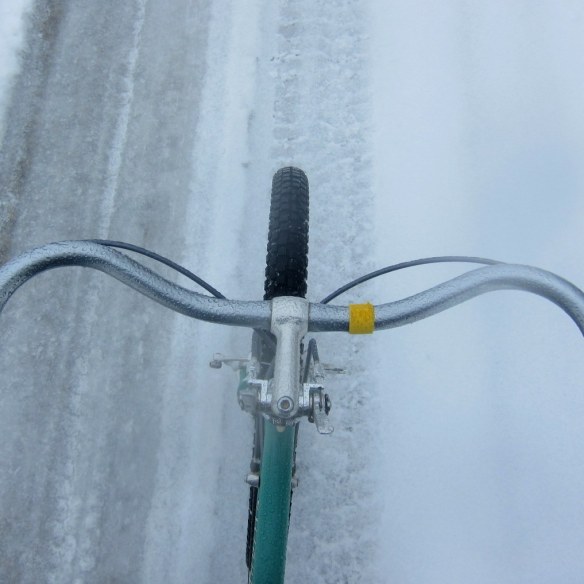 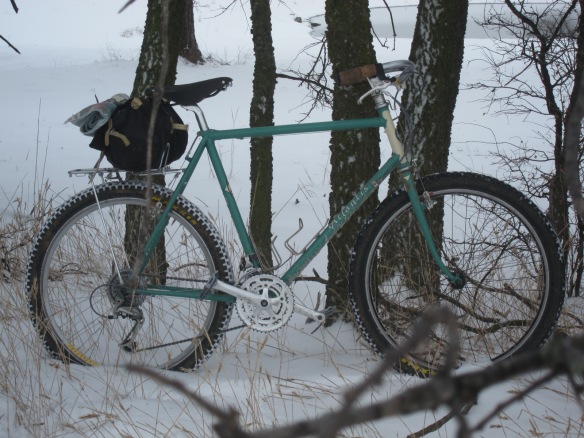 It wasn’t really snow. But it was enough freezing rain and sleet that schools closed and a lot of folks opted to avoid driving on icy roads for the sake of getting to work. Since my commute is over 50 miles (one-way), and that makes for a lot of opportunities for things to go wrong, I was one of those who avoided the roads.

Today’s outing was a completely off road adventure. It was in the mid-20s, windy, and the wind chill was in the low teens. Low gray clouds were sailing across the sky. Sleet was blowing against my bike and coating it in a thin glaze of ice. A great day for a ride, and all day to enjoy it.

This is far from ideal Pondero conditions, but with so much time available it seemed like a good idea to show my northern buddies I don’t always run from the white stuff. 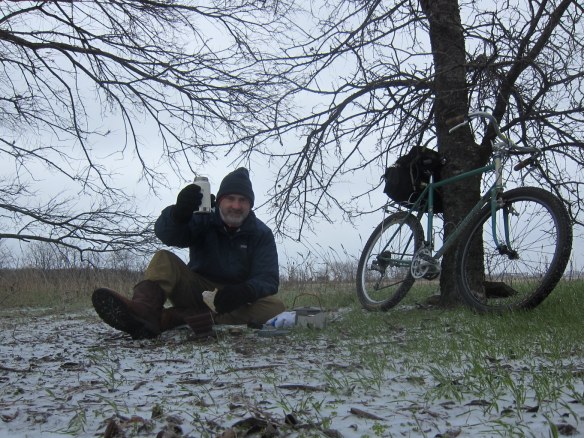 It was slow going on uneven range land, riding on top of 2-3 inches of frozen sleet…and then breaking through. Rolling resistance was pretty high. So after a plodding, epic long off road search, an acceptable patch of ice was found in a grove of trees. It seemed a decent spot for a brew-up.

The hot, fresh coffee warmed my insides. The clouds flew silently by, and there was no sound except the wind and the crackling of ice-coated tree branches. As I repacked my gear, I mentally prepared myself for the long, cold ride back home. 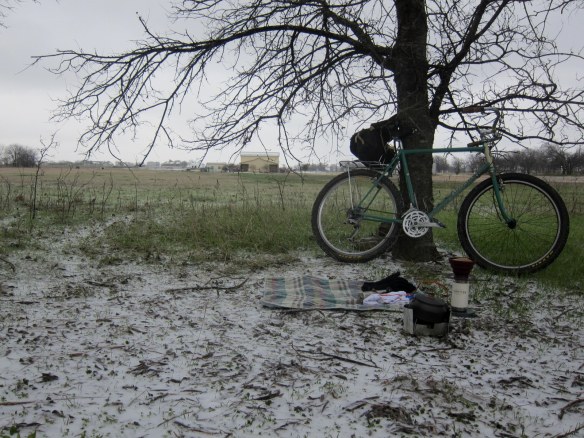 Fortunately, I returned to the house before I succumbed to frostbite and hypothermia. Although I have a reputation as a Leisure Consultant, perhaps you are impressed with my toughness, and you will pretend you don’t know that’s my house you see in the photo above.

The sky had alternating streaks of lighter and darker gray. It looked like massive, upside down ocean swells rolling from north-to-south on a chilly 20-30mph wind. But the sun’s glare was not in my eyes and it wasn’t 107 degrees, so it was a lovely day.

Brew-ups with a view are better, and water views are as pleasing, and as attention grabbing as campfires. A large grass cluster provides a suitable wind break for the morning’s activities.

On the prairie land of north central Texas, a thousand shades of brown against a backdrop of gray sky is a common scene. Beautiful in its own way. 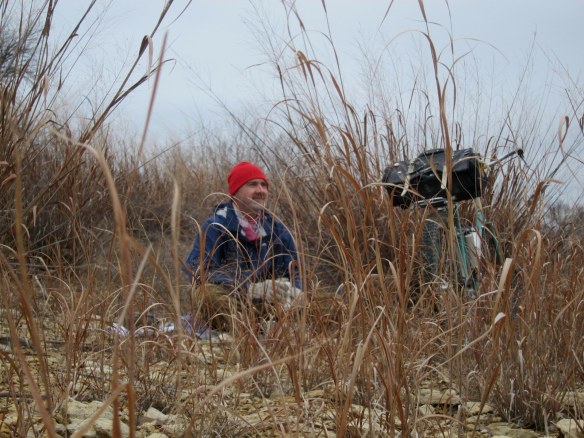 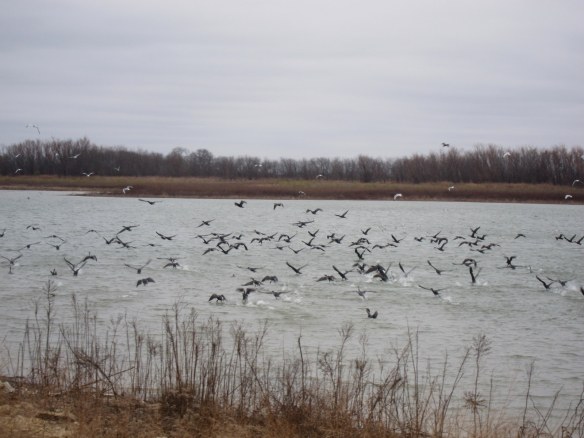 Sipping coffee behind so many clusters of tall, brown grass, the ducks are oblivious to my presence until I stand to take a photo. 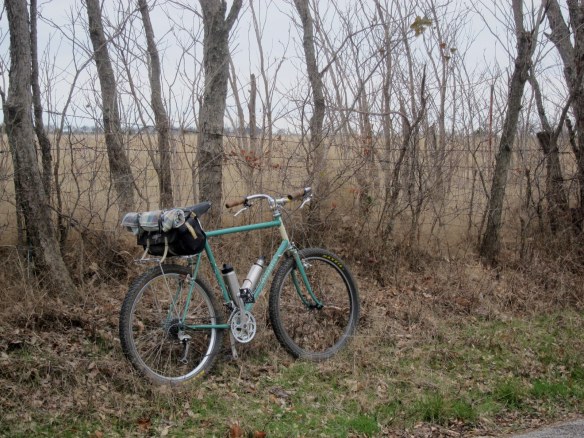 Mountains and oceans are nice. But brown grass prairie land has a special subtle beauty available to those who seek it. 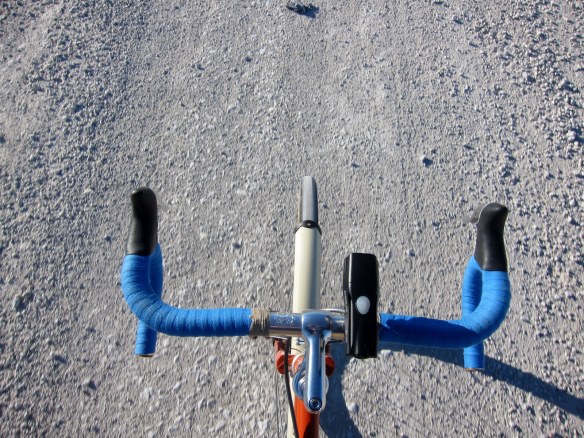 Back in the day when I attempted fitness and speed, every dog chase was a sporting challenge and an opportunity to turn on some speed. It was part of the adrenaline rush I sought in my rides. When I was in top form, even the fastest dogs struggled to keep pace and even the meanest ones were working too hard at sprinting to coordinate a lunge and jaw snap. But that is no longer the case.

These days I don’t even attempt to outrun chasing dogs. I watch them closely and try to determine whether they are out on a social call, or something more serious. If its social, we cruise along together, enjoy light conversation and one another’s company. Otherwise, I tend to speed up a little and zigzag across the road to try and disrupt their rhythm. I know there are plenty of strategies, products, and tools out there that might aid in my self-protection. Meh. I might try something else one of these days… 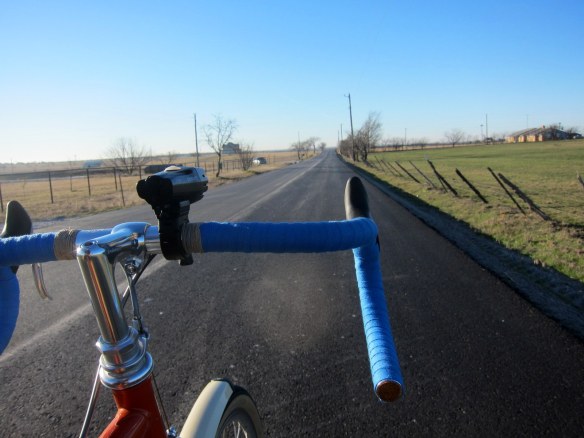 Today’s ride, however, reminded me of my glory days. Two dogs had an early jump on me and were already at full speed across their yard before I noticed them. As usual, dogs chase me when I’m going uphill.  But my Quickbeam with Barlow Pass tires rolls pretty fast, I had a gentle tailwind, and was zipping along well myself. So well, in fact, that I reached their intended cut-off spot before they did and simply rolled away from them. Those feelings of fitness and smug superiority came flooding back, and it was sweet. Victory and glory are mine!

Disclosure – The dogs were the smallest Yorkie and Chihuahua I have ever seen.

It was a lovely morning. Even so, the warmth from the effort of grinding coffee beans was most welcome. The wind blowing off the lake was rather blustery and cold. Originally, the plan was to camp in a place more protected from the wind, but that didn’t work out, and getting settled in camp turned out to be more of an adventure than anticipated.

Arrival at the campsite wasn’t anticipated to be after dark. And this wasn’t the campsite anticipated. The plan was to return to a general area within the Culp Branch Native Prairie that I had visited many months ago.  But it was much more brushy, the sun had already set, and it was difficult to find a desirable spot to set up accommodations. Since it was getting dark fast, the original plan was abandoned in favor of the Isle Du Bois State Park fall-back. The only problem was how to escape from brushy wilderness in the dark. Fortunately, memories of my prior visit allowed recovery of the single track trail and eventually finding the exit as the pre-moonrise darkness engulfed me. The additional 5 miles were covered without incident.  A campsite was selected based on a vague recollection of a general area and the presence of suitable hammock holding trees. Setting up camp in total darkness took longer, but there was no rush. 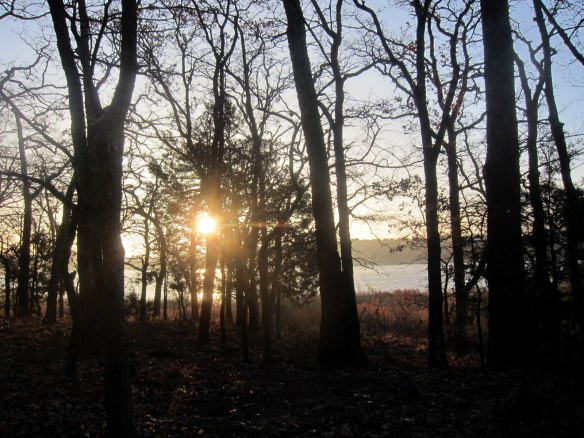 A mild breeze blew all night, punctuated by several more intense gusts. Every location my sleeping bag touched the hammock directly, seemed to have the heat my body generated stripped away. Fortunately, my windbreaker and gloves (in addition to my Thermorest pad) were available to minimize cold spots. Periods of no sleep allowed time to ponder how nice an underquilt might be. But morning came at last, and the sunrise was cheery. 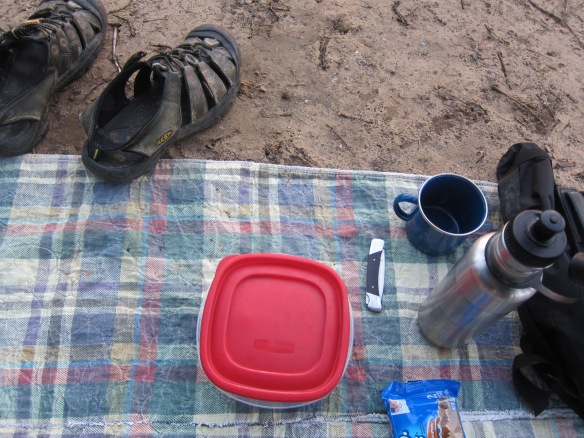 Part of breakfast was consumed within the comfort of my sleeping bag.

An attempt was made to orient the hammock parallel to the wind to minimize exposure. It seemed to work fairly well. 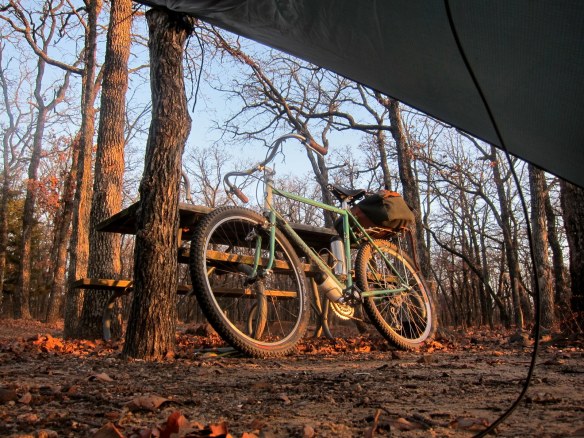 After breakfast part one, it was time for a short walk around. The theory is that a little early morning exposure to a chilly wind will make fresh coffee even better. 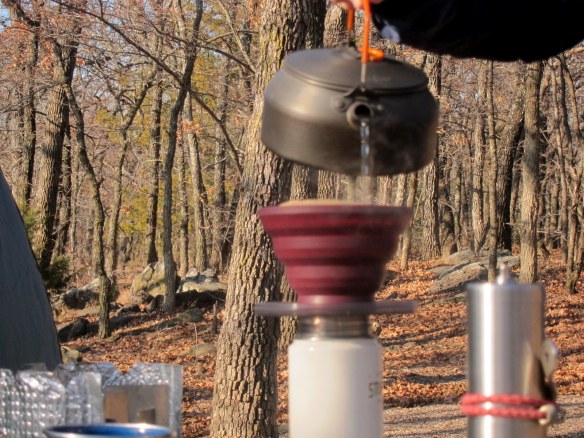 After breakfast is a great time to pedal the unloaded bike on trails within the campground. 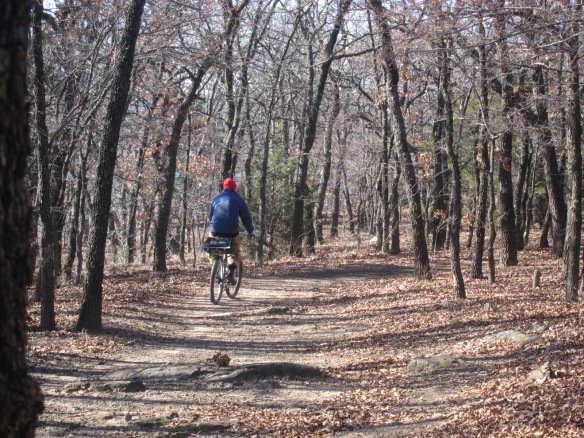 When the playtime ended, the bike was packed up for the return trip.

A brief pause in downtown Sanger. Sometimes, when the light is right, those storefront window reflections catch the eye. 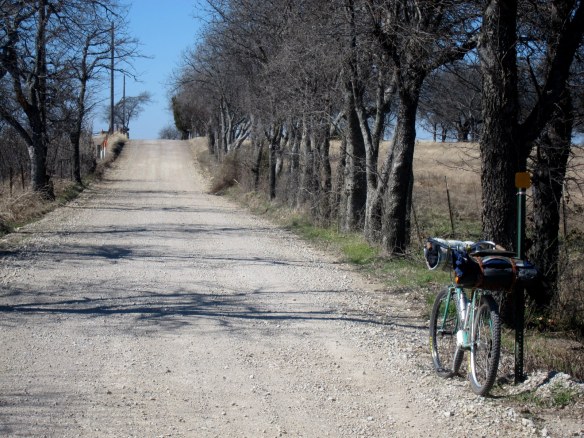 Almost home, pondering the fact that overnighters were accomplished in each of the first two months of this year. Will the trend continue?