My Carradice Barley bag is probably my most used bag. I need more capacity when I’m S24O-ing, but most of my rides are less than 6 hours, don’t involve huge temperature swings, and the Barley seems to fit what I need. I can even get my brew-up gear in there.

The first thing I noticed was that the bag seemed to be swaying more than usual. Eventually, as I was packing for a ride, I realized that the seat post attachment point was almost entirely detached.

Mrs. Pondero to the rescue!

Pink thread because she said that was the strongest quilting thread she had available.

I’m quite pleased to have such a great bag back in service, and fortunate to have somehow persuaded this wonderful woman to marry me 31+ years ago.

I think the first thing he said as he walked toward my front door was, “Are those bee hives?” Today I had an opportunity to serve in my capacity as “Pondero, Leisure Consultant, specializing in bicycles, hammocks, and coffee outside”. My customer’s name is John, from Arlington, Texas. 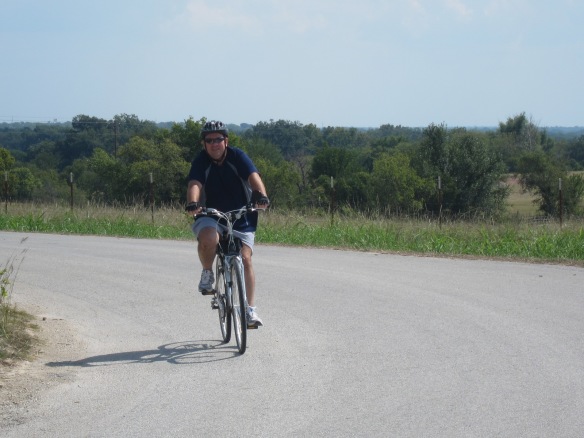 He ordered up a ride in the north Texas countryside. His usual routes include more urban and suburban settings.  He told me he normally rides routes near his home and the trails along the Trinity River.

He didn’t have all day, so we didn’t bring the hammock or coffee gear. He had an appointment with a grill and his beloved St. Louis Cardinals later in the afternoon. Still, we managed to find opportunities to stop here and there to enjoy the quiet shade and the breeze. In the photo above, I was disappointed that the spotted horses I often see along this stretch of Sam Bass Road weren’t in sight. John didn’t seem to mind. After one especially nice puff of breeze came along, he said, “This is what Saturdays are made for”.

Not having a prior opportunity to prove his bike on gravel roads, John requested a mostly paved route. That’s what I delivered. But I did sprinkle in about 10% gravel because…well…what would a ride with Pondero be without a little gravel travel? 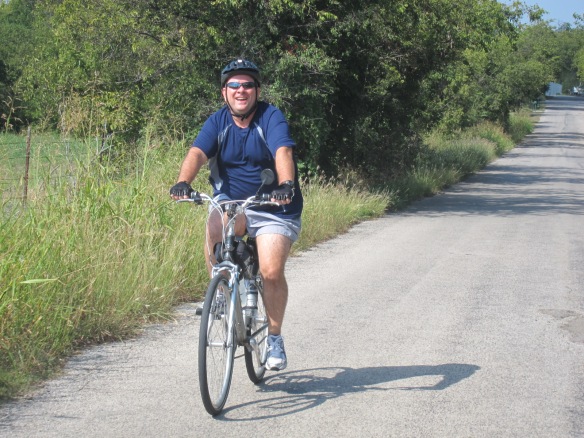 I enjoy having an opportunity to share some of my favorite routes with my friends. It is especially enjoyable when those friends are people who aren’t normally fortunate enough to ride in rural areas. John commented multiple times about the unobstructed view from some of our little hilltops. It certainly isn’t a dramatic mountain view, but it isn’t staring at your neighbors garage either.

I had a great time out on the bike as usual. Today, however, I also had the extra reward of that beaming smile.

As is my usual practice, I pre-ride the anticipated Ramble route each year. Reconn for the 2014 version was today. Even with the event still 8 weeks away, it was important to check a few things. Not only have I moved the date from December to November, I’m also pondering a new route.

The new route (if chosen) would combine features from past Rambles. It would include stops at the Greenwood Grocery (a popular burger stop for ride participants) and the Rosston General Store (with the wood stove, crooked and creaky wood floor, and famous Lone Star poster with the bicycle model)…(oh yeah, and the catfish heads on fenceposts that weren’t included on the route in the last two years would be back).. 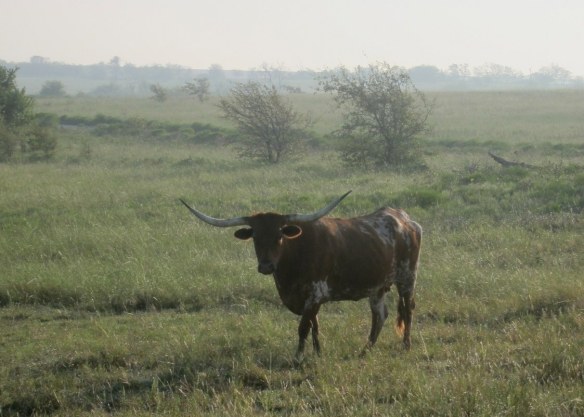 By including both amusing stopping points, the route would be longer. This route is about 51 miles, includes about 2370 feet of climbing, and is mostly gravel roads.

The longer route would obviously take more time than past Rambles. Further, since the Ramble occurs on the last weekend of the Coffeeneuring Challenge,  I’m planning to stop somewhere long enough for a brew-up on the route.

Daylight savings time ends on November 2, so we’ll have less afternoon/evening light. So more time required on the route means an earlier start. Unlike the 10am start of the recent versions of the Ramble, I’d roll out at 9am with the longer route.

Let me summarize the changes I’m pondering for this year. New date (November 15, and that’s fixed), more miles, a little more climbing, two feature stops, a definite brew-up stop (for me at least), and starting one hour earlier.

Would any of those changes make the event undoable for folks who are hoping to participate? 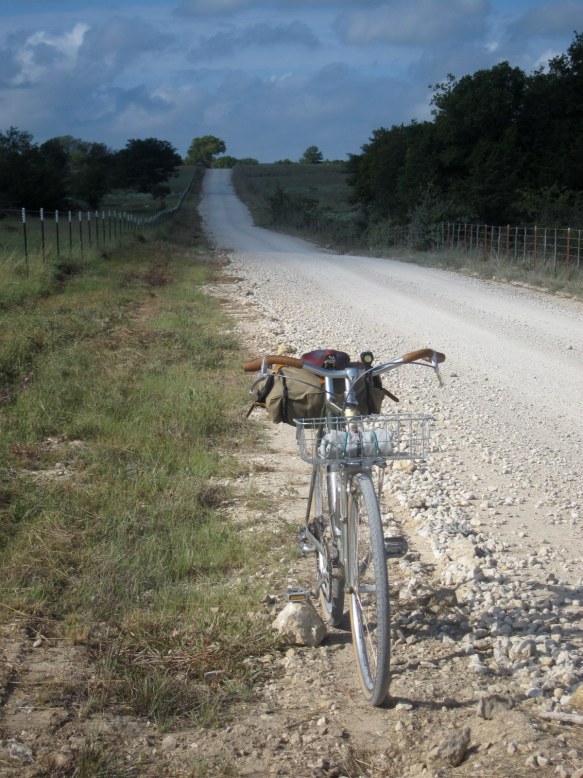 I’m probably going with the new route, unless I get a preponderance of comments from folks who can’t manage the distance/time/earlier start.

As you consider participation, don’t underestimate the wind in these wide open spaces or the challenge of riding large, chunky gravel in a few locations.

All photos in this post were taken from today’s reconn ride. I had a delightful ride and think most participants would enjoy the new route.

Oh, I almost forgot, Nick (Rosston store owner) told me today that the Lone Star poster model came by for a visit recently. He said she plans to stop by again sometime in November. I’m not going to say that the celebrity would be there when the group arrives, but you never know.

If you haven’t blocked out ALL DAY for the Sixth Annual Fall Finale  Fifty-ish Mile Country Path Ramble on Saturday, November 15, do it NOW! More details forthcoming. 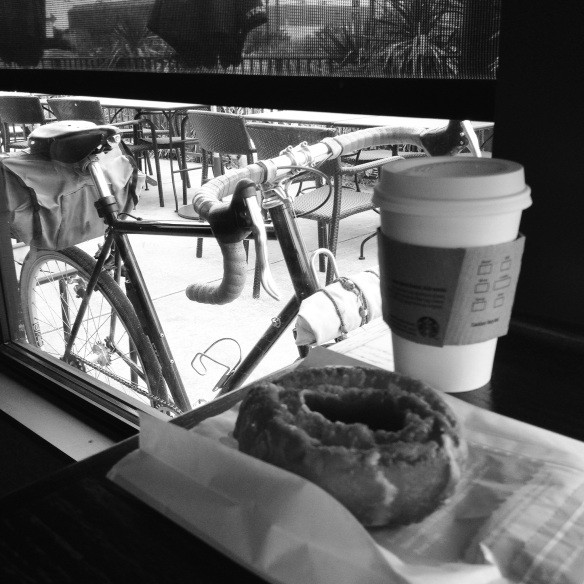 You might say I’ve been training for an entire year. If one were to look back on my blog posts since this time last year, accounts of numerous bicycle outings involving coffee would be found. I’ve been an active member of the Association of Caffeinated Wheelmen since the enamel pins were first made available. I followed with fascination the first three years of fall season coffeeneuring. But this year will be my first attempt at coffeeneuring myself.

Last year’s introduction of the “coffee shop without walls” rule was a game changer for me. I plan to take full advantage of this rule. Living in a rural area, it would be quite a time and distance challenge for me to ride to (desirable) coffee shops with walls. The photo above, taken at a Starbucks in Gainesville, Texas required a 50 mile round trip. The closest real coffee shop is about 8 miles from my house.

Coincidentally, the 2014 Coffeeneuring Challenge ends the same weekend as the Sixth Annual Fall Finale Forty-ish Mile Country Path Ramble. So my guests can expect my ride on that Saturday will include a brew-up at some point along the way. This blog space will likely be filled with Ramble and Coffeeneuring Challenge updates between now and then…unless something else worth mentioning happens during my favorite time of year. And that could happen too.

It was one of those forehead slap moments, when I realized there was a whole section in one of my local State Parks that I haven’t explored.

So I set out early Saturday morning to see if I could find a nice new camping spot…or a spot for future coffee brew-ups.

I did a fair amount of off road exploring and singletrack. 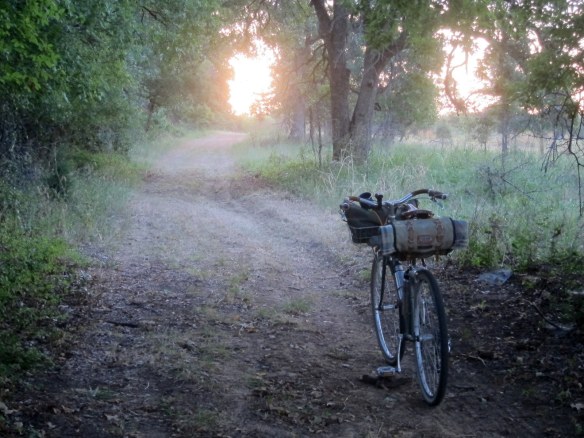 I found a lot of empty and quiet. 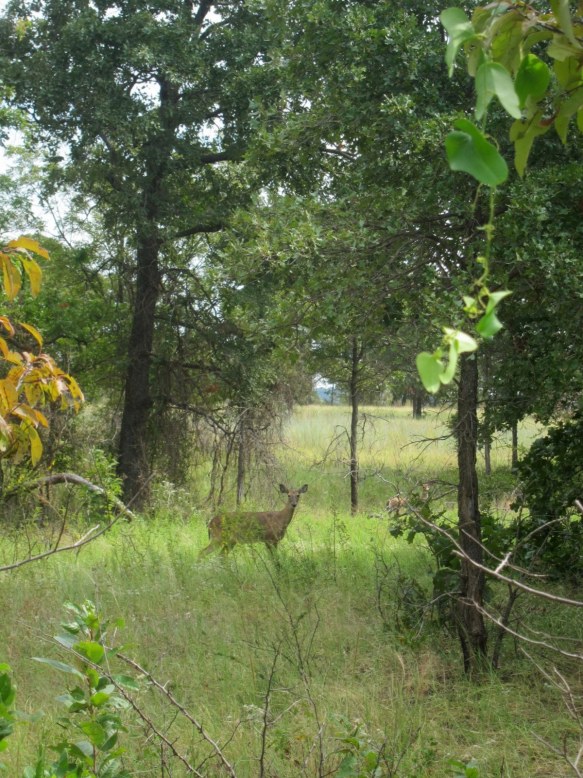 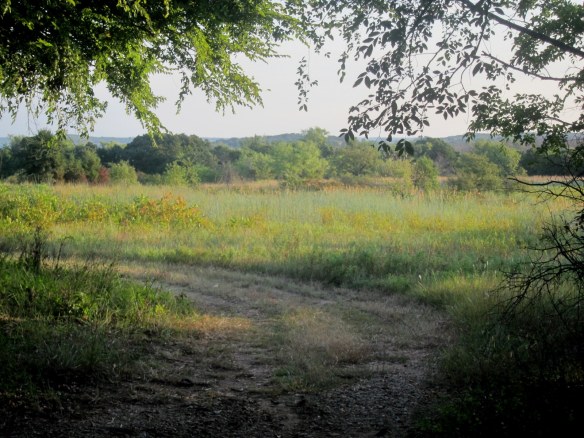 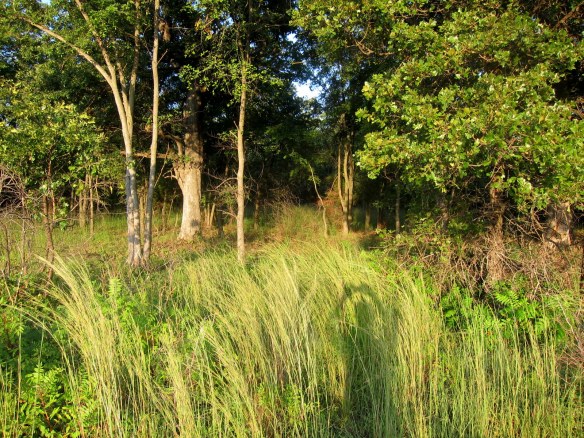 And I did, if fact, find a nice place to camp.

It had plenty of trees for hammock hanging, and a nice down slope view of an open meadow.

So I practiced a micro-camp set-up to imagine what it might be like in a few weeks with cooler, more ideal, camping weather. 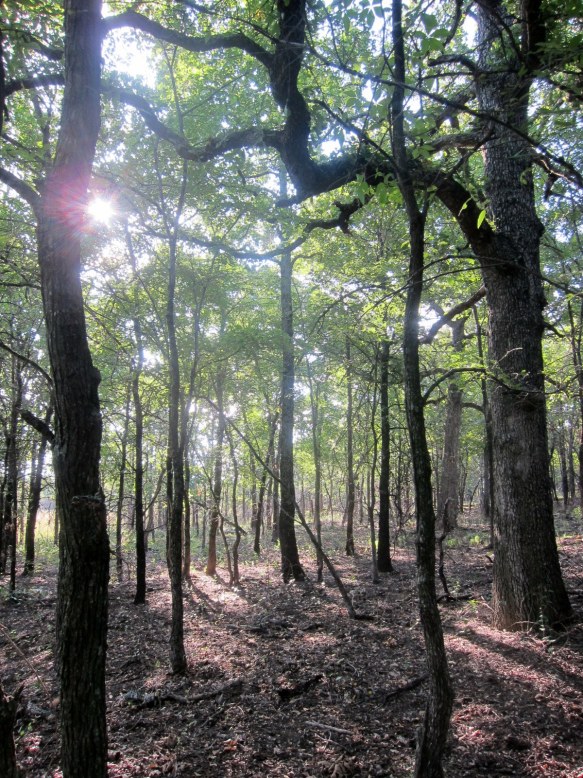 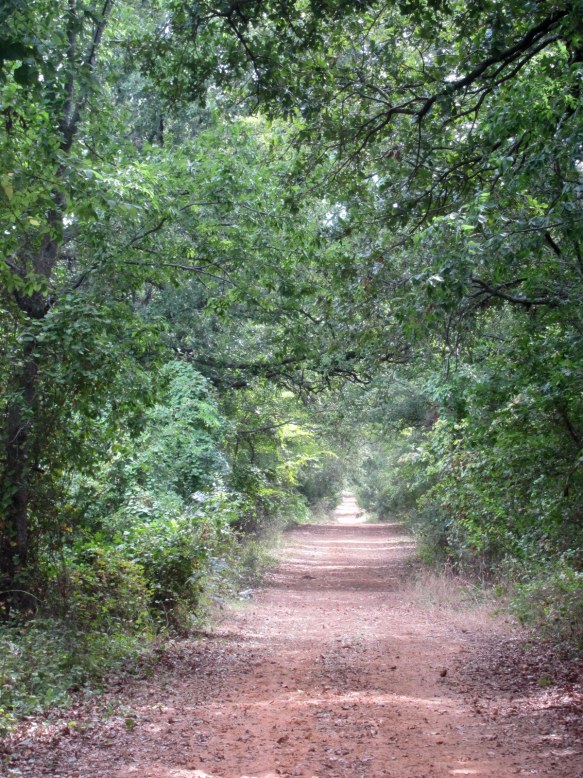 Then I packed up and did a little more exploring in other areas. 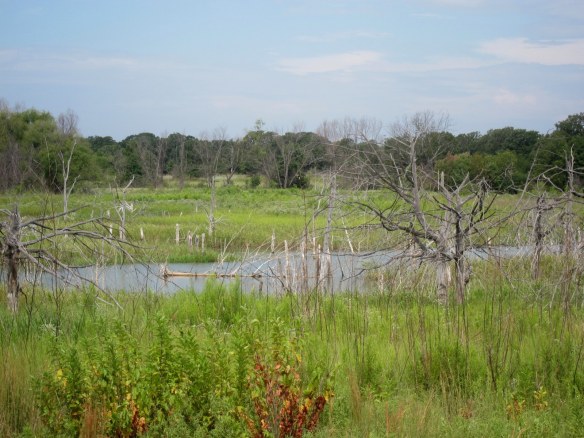 In addition to my coffee, I also brought lunch to extend my outing. 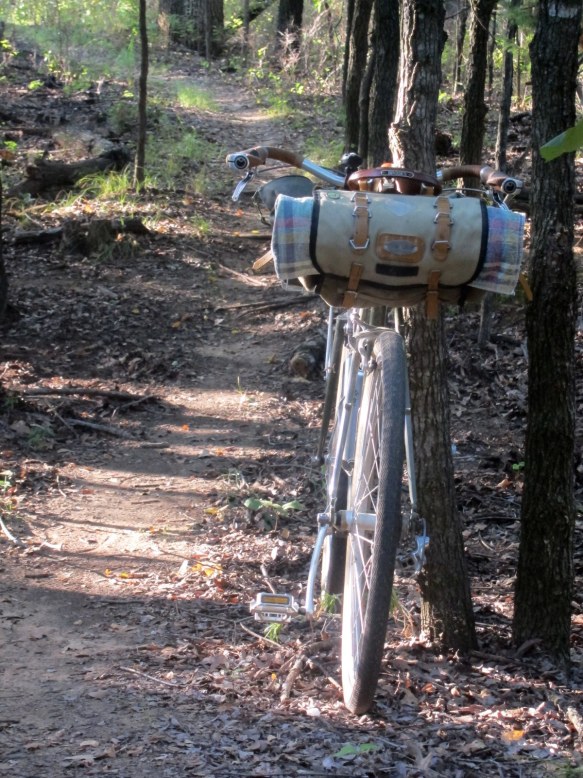 I had more time AND more fuel.  That translates into more mellow singletrack for the country bike. 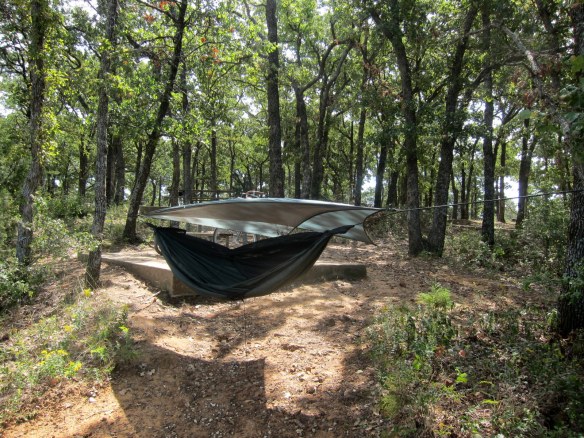 In the end, I made my way back to a favorite lake overlook.

There I had my lunch, another round of coffee, and more breezy hammock time.

The long range weather forecast suggests a possibility of cooler temperatures next weekend.  I might be able to try the new spot sooner than I imagined.