The forecast for today was HOT. Not wanting to spend several hours pedaling around and enduring the heat, I decided today would be best spent exploring future bike camping opportunities. It will cool down one day, and when it does, a wise man is prepared with places to go. Maybe Eisenhower State Park could work.

I spent the first hour plus driving my pickup north and east toward Lake Texoma, which is a wide spot in the Red River and the border between Texas and Oklahoma. The bike, hammock, and coffee supplies came along to make exploration more fun.

A lovely picnic area served as my base of operations. The truck was parked there and I set out to explore by bicycle. 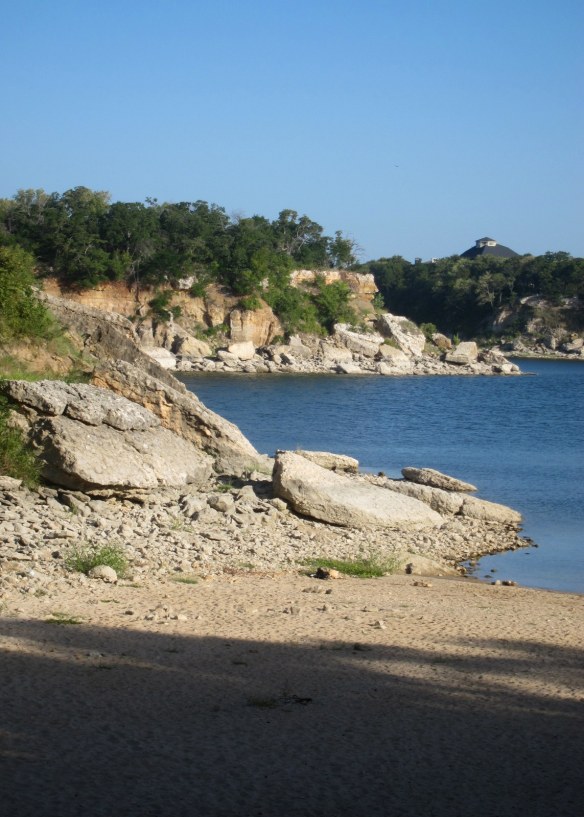 In the vicinity of the State Park, the lake is surrounded by steep rocky dropoffs to the water’s edge. This beach was one exception and appeared to be a popular water access location. 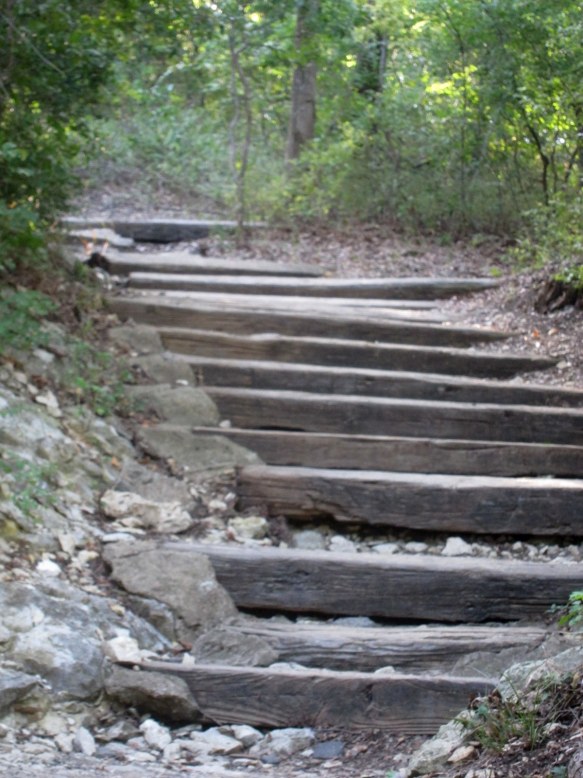 I mostly explored the park roads, and sought out potential camping spots for future fall or winter camping. But I also found a few trails. Those near the lake shore were steep enough to require steps. 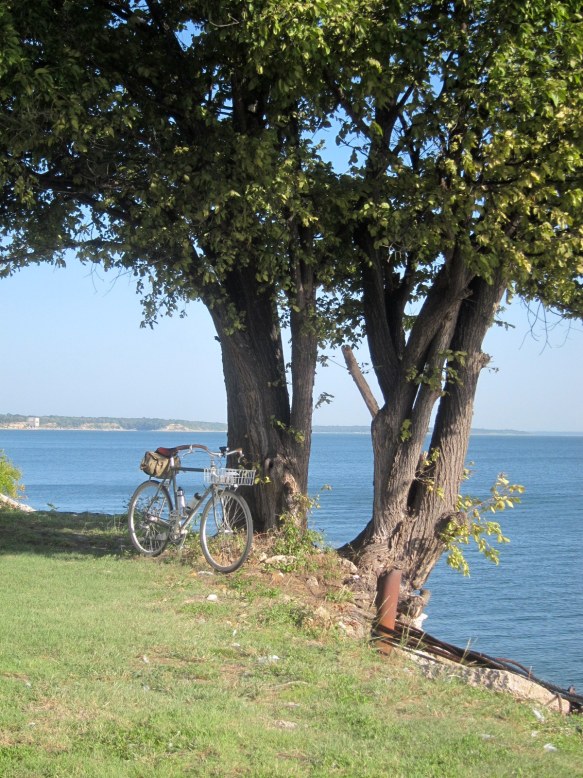 The relative high ground around the lake made for pleasant views of the massive lake.

I paused here to wave and say “howdy” to our neighbors on the other side in Oklahoma.

I found some singletrack… 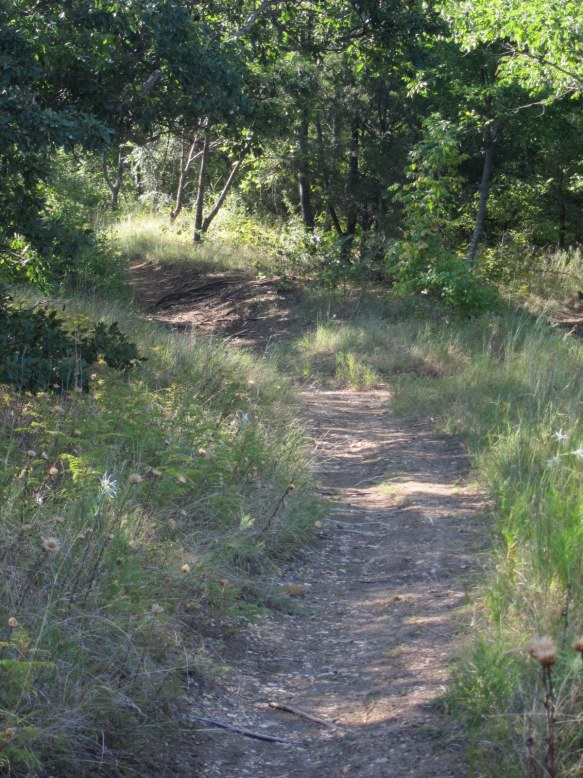 I pedaled some and pushed a little. 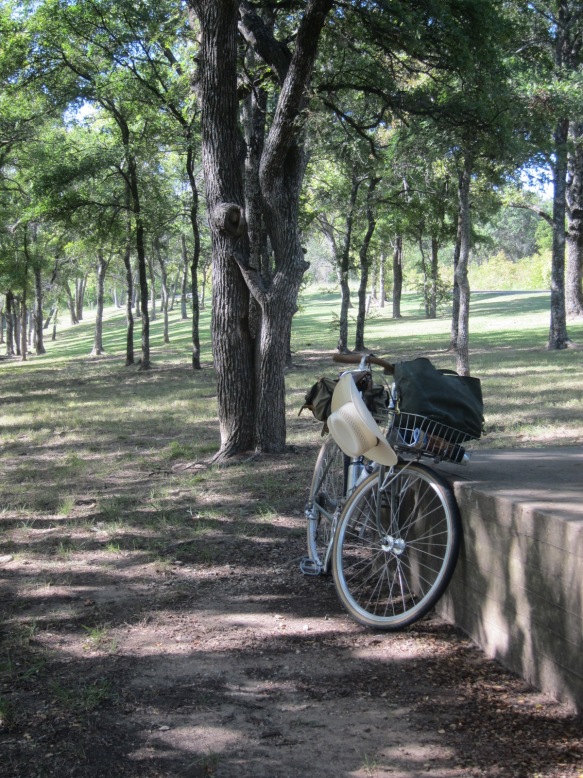 After convincing myself that this place is worth a future visit, I was satisfied to head back to base camp.

There were plenty of shady and breezy spots for a hammock hang. 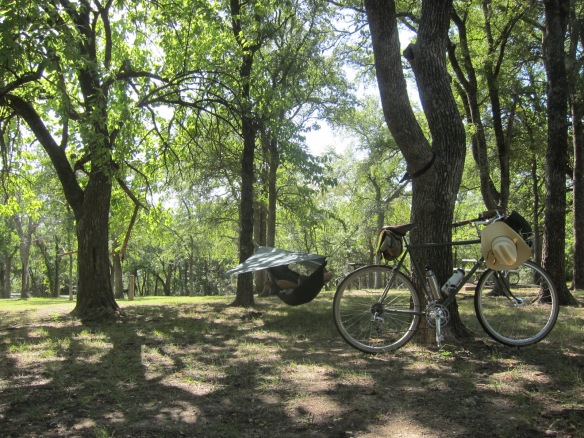 It was time to practice my craft as a leisure specialist. 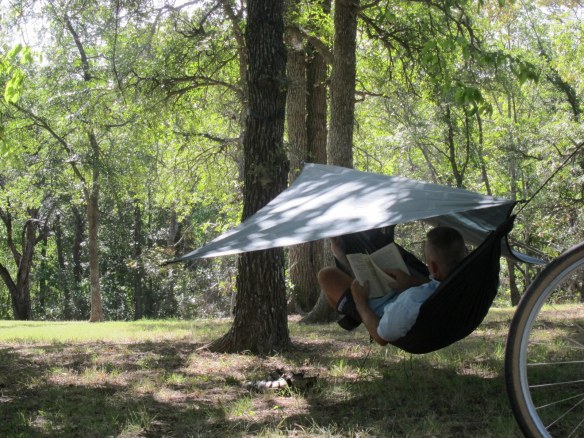 Finally, a coffee brew-up to round out the experience.

I didn’t get many pedaling miles today. It was almost like an appetizer and I’m hungry for more. But I avoided heat punishment and prepared myself for cooler days. Ideal camping days are coming and it is very good to ready.

These photos are not adequate to tell the story. In my typical solo outings, I can think about photo opportunities, and take my time trying to get a decent shot, to help communicate the event. I learned, however, that being surrounded by friends is as distracting and it is delightful. So this post has only a few images from a gathering of the Sunrise Coffee Club, and nothing from the gathering at Velo Cult the evening before.

Following up on some casual conversation at the Lake Pepin Three Speed Tour, I met up with Shawn Granton of the Urban Adventure League. He guided me to Velo Cult Bike Shop, where he had made prior arrangements for me to meet some of the locals. I could have spent hours gawking at their collection of bicycles. I even tried to take a few photos of their bikes, and the bikes of some of my new best friends, but the lighting resulted in underwhelming images. If I remember the round table correctly, there was Ryan, Heather, Vince, Chris, Coconut Bill, Shawn, and Andy. The conversation included past and current bike tours, comics, various bicycle components, French pronunciation, and more. Even though I was ribbed a bit for coming to Portland without a bicycle, I was welcomed into the group. I was as happy as an adopted stray puppy.

At some point in the evening, I asked if the Sunrise Coffee Club was still active. This is an informal group of folks who meet occasionally at sunrise for a coffee outside social. Consistent with his personality, Chris seized the question as an opportunity to make magic happen. Within minutes, he had set the time and place, and had sent out digital media invitations. All I had to do was show up. Very cool.

Andy and Chris were already there when I arrived. Eric showed up a few minutes later. So four of us enjoyed the early morning light, good coffee (and tea for Andy), and sharing the hard-to-explain bicycle/coffee connection. For me it was a genuine Portland experience burned into my brain. 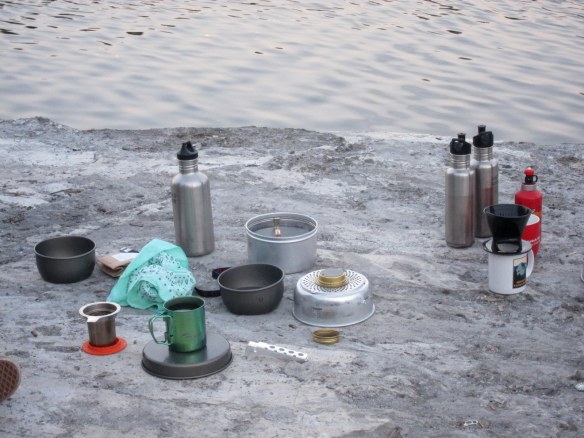 This delightful array of coffee and tea gear made me feel right at home. 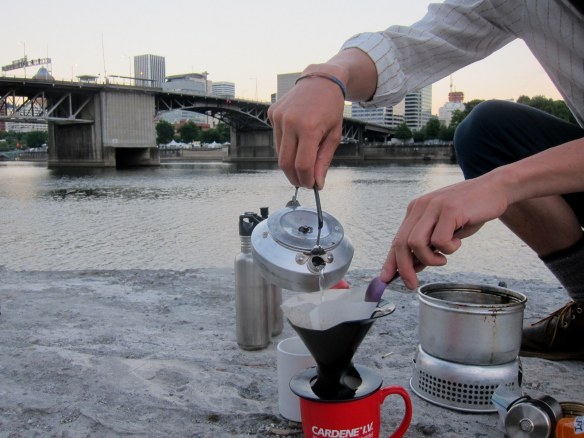 Chris serving me fresh ground pour over coffee. It was excellent in the cool morning air. 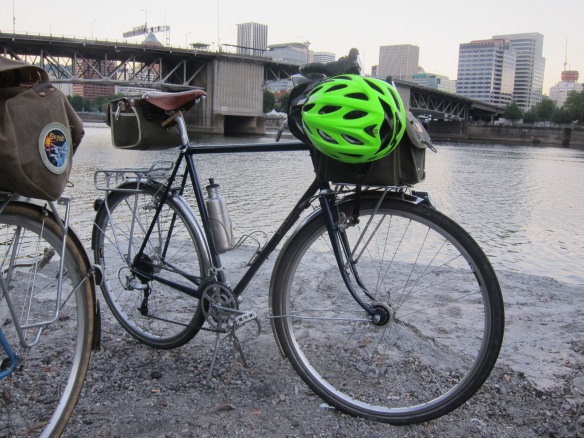 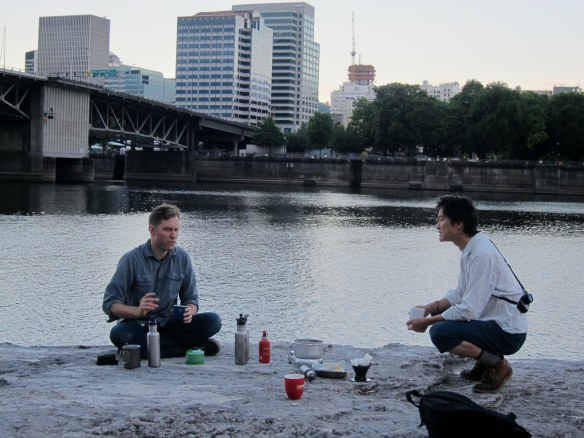 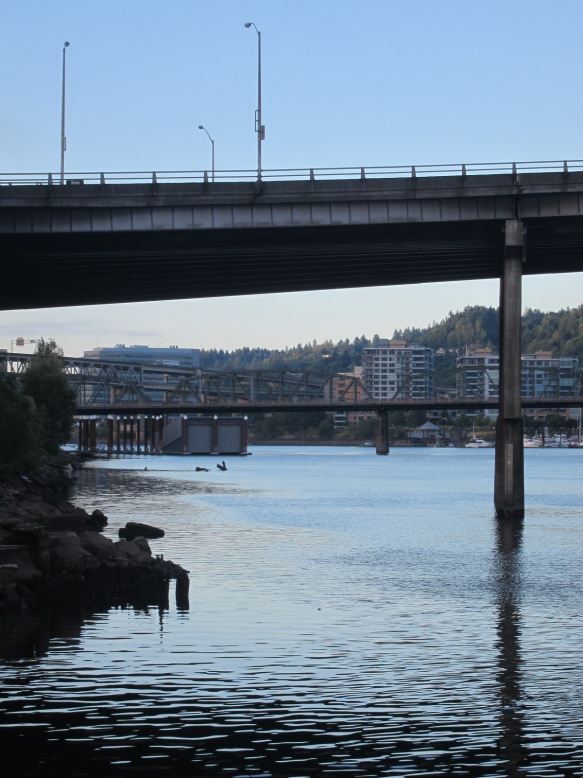 If I recall correctly, the word “hospitality” has a root meaning of “love of strangers”. Thank you Shawn for setting this up (on the eve of your own bike tour), and thank you to my new friends in Portland for a lesson in hospitality. You guys are invited to the Sixth Annual Fall Finale Forty-ish Mile Country Path Ramble on November 15. I know some of you guys are thinking about it. I hope I have a chance to return the favor. 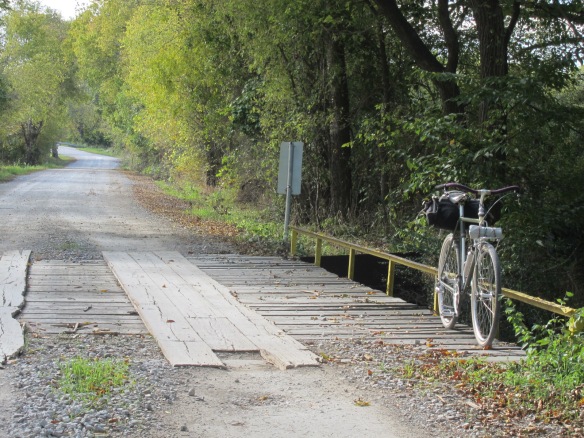 The 2014 version of the Ramble will be held on Saturday, November 15. This annual event has been traditionally held in mid December, usually at the end of Fall, on the Saturday before the winter solstice. I have learned, however, that optimum rambling conditions usually occurs in mid November here in northwest Denton County. So I’m trading tradition for what I hope to be a prettier and more comfortable ride for my guests.

I hope you veterans will block out the day on your calendar, and help me get the news of the date shift out to your friends. I have some ideas for other event enhancements that I’ll detail later.  I’ll also have more information to help new folks decide whether to participate. For now, the message is “save the date”.  Oh yeah, and it is free, starts/ends at my house northwest of Sanger, Texas, and all are invited.

It’s typical August hot out there and I’m planning for the cooler air we usually enjoy on the Annual Fall Finale Forty-ish Mile Country Path Ramble.  Join me! 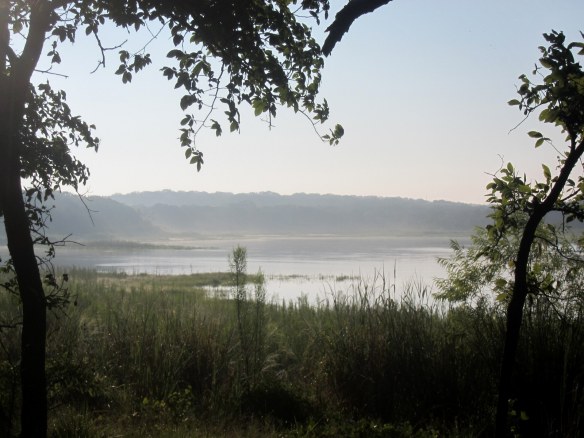 I wish I was more clever. Then I’d be able to add background music for this post. If I could do that, it would be the Marshall Tucker Band’s song, Desert Skies. When I get away for an overnight camping trip, pedaling along and hanging out at camp feels like this song to me. So, if you’ve plenty of time, you might want to click that link, and play it in the background while you scroll through a few photos from my latest S24O. Listen for the title of this post in the lyrics.

a setting sun makes the opposite bank glow

all set up and ready for dinner 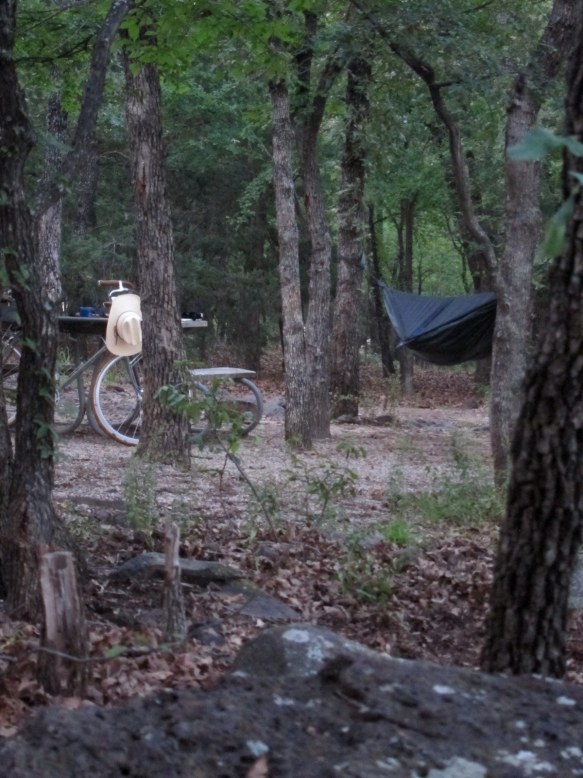 an oasis of shade trees 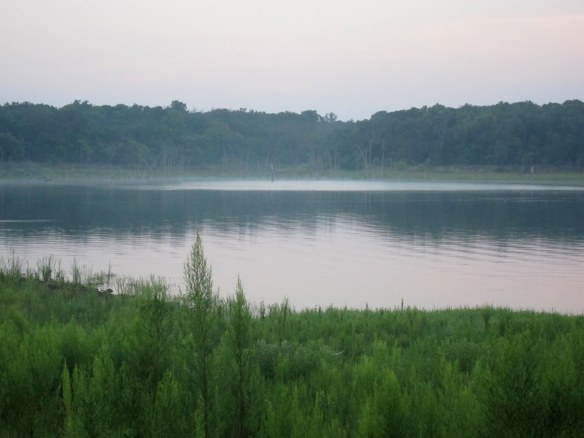 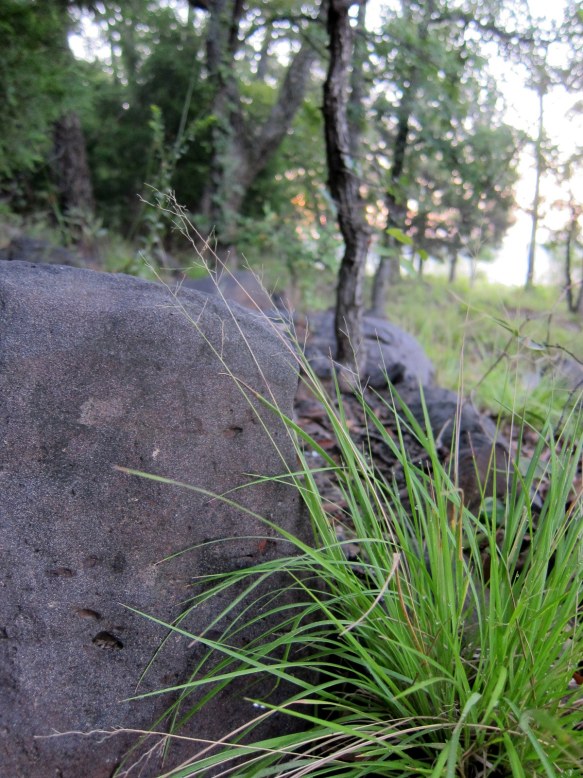 contrast in texture and color 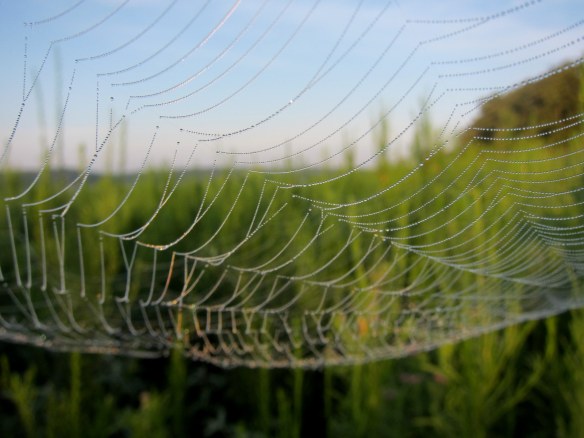 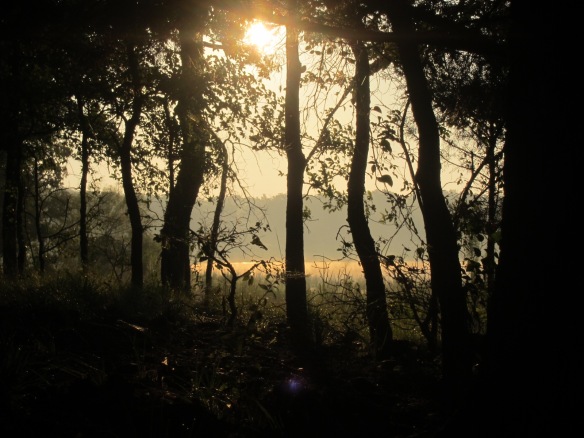 looking out, or looking in? 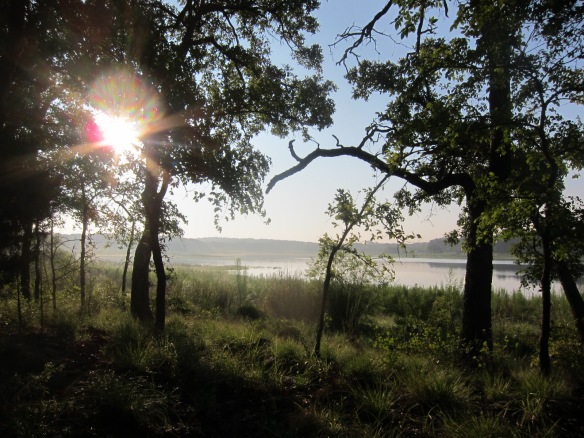 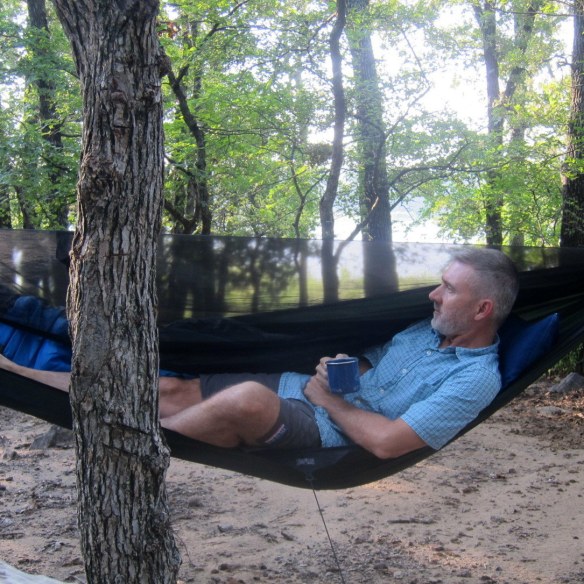 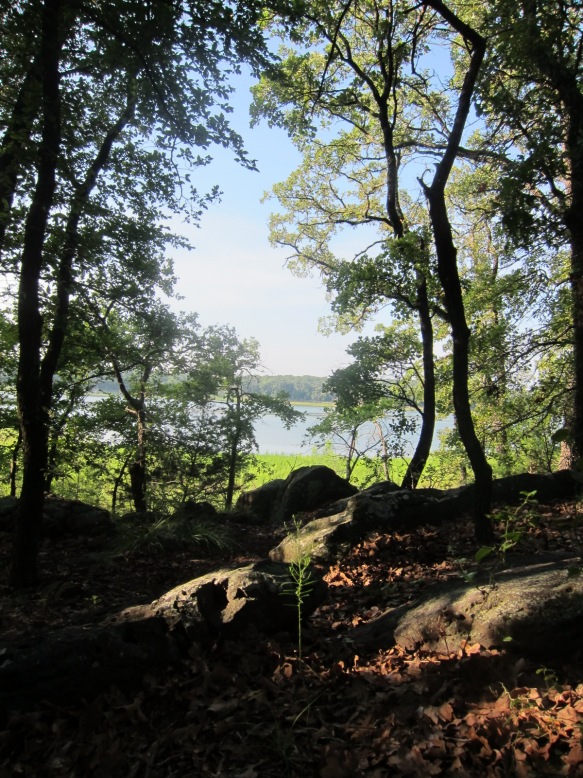 time to pack up