My posterior was only inches above the grass, and the hand of the wind rocked my hammock back and forth like a mother’s hand on a cradle. The leaves of the mesquite tree flittered in early light with long shadows reaching toward the southwest. As my eyes studied the knarled bark on the tree, their lids surrendered to the lullaby and dropped shut.

Planning a sunrise breakfast in a cool lake breeze, I had rolled out at 5am. In such perfect conditions and contentment, a short nap seemed the logical next step.

I arrived a few minutes before the sun came up and found a lonely spot in a picnic area with a couple of nicely spaced trees.

It proved to be a pleasant spot to prepare breakfast, brew some coffee, and practice some advanced hammock lounging.

It was the first time I’ve tried to fry eggs on the Trangia stove. I need to work on my technique and presentation, but they tasted pretty good.

Since I brought enough fixins for more than just coffee (and Pop Tarts, of course), my table was a delightful mess.

Fortunately, the hammock trees and picnic table were oriented perfectly to allow me to set up my tarp so that it provided shade on the only side I needed shade…and I had perfect lake-cooled ventilation.

Since I didn’t plan well and ran out of fuel, I had to settle for a single cup of coffee. But, as you know from reading this blog, I’m quite a rugged fellow, well-acquainted with hardship. Yes, it was a fearsome situation and panic almost got the best of me, but I managed to survive it.

So I had me some paved roads, gravel roads, several miles of pedaling in the dark, breakfast outside at dawn, and a short hammock nap. I conquered the north Texas summer heat. I managed to do all that and make it home before lunch on a single cup of coffee. Epic, dude.

Mrs. Pondero says, “There are no free puppies!” Which means, of course, that they are only free until they get home. Then those little buggers get quite expensive, what with all that vet stuff, food, gear, training, and other special needs. They all have special needs.

I probably should have thought about that when one of her bee-keeping friends asked if I wanted this old bike before it is trashed. She might as well have said, “Wanna free puppy?”

Based on limited research, it appears to be a 1991 Trek 850 Antelope. I don’t think it was bottom-of-the-line, but it doesn’t appear to be anything special. The only reason I said yes is that I’ve been thinking about a old, cheap rigid frame MTB that I could play with and haven’t been able to pull the trigger…something with knobby tires…it would be kinda fun to have project bike..and, hey, I’ve got a parts bin that might allow me to get this thing running for free.

Did I really just say that? 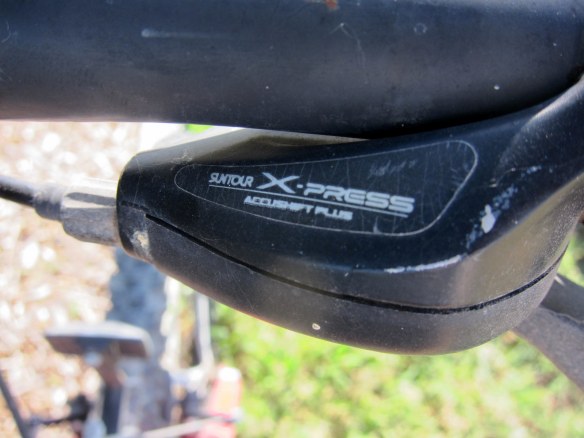 Maybe this stray needs a home, but honestly, I’m not sure I want to take this on. So I’m going to walk around and stare at it awhile to see if I can ponder a potential (cheap) project in there somewhere. If not, maybe it’ll be a donation.

What I really need, is a visit from Jon Grinder. I have seen him take uncountable numbers of forlorn strays and turn them into fun, useful, interesting, and attractive bicycles. He has vision, creativity, and mechanical skills. He has the ability to see potential in a bicycle. I’ll bet if I were to describe what I wanted this bike to do, and turned him loose in my garage, he could walk out with a pretty play toy in one afternoon.

So Jon, if you are out there, what do you say? Play with it, or find it another home?

As a matter of fact, I’d appreciate input from anyone interested enough to toss me some ideas. Project concepts…or someone else’s headache. Is there a logical way to make an intelligent decision on this?

Let me narrow the field slightly. It’s either a donation or a knobby tire MTB to ride in the yard or on the local (easy) trails kind of bike. I might try to recall my once impressive wheelie skills, but I don’t plan to take it over any sweet jumps. Who knows? Maybe I’ll get some free studded tires and ride it on the acreage ice during the winter?

What says the gallery?