In which I change back to drop bars, make-do with scrap bar tape, and do my longest ride of 2014 so far…

I met up with my friends on Chisum Road not far from my house. It started a little brisk, but we had to shed layers as the day warmed up.

Nanette. It’s nice to have a lady along. She adds a certain level of class that is missing when it is only guys. 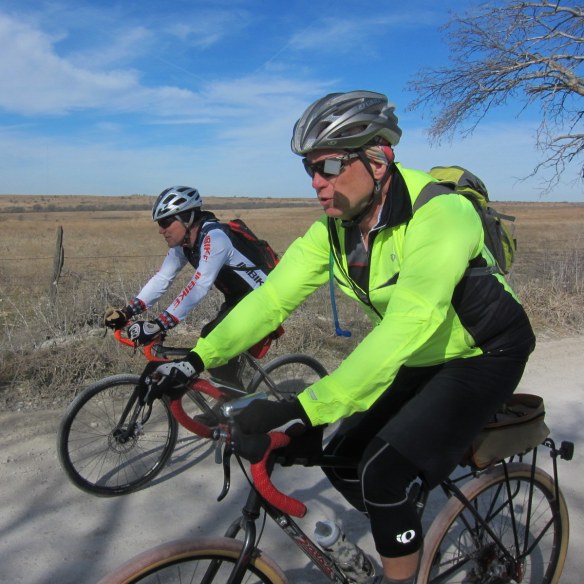 I joined them for just over 60 miles of their 70 mile route. 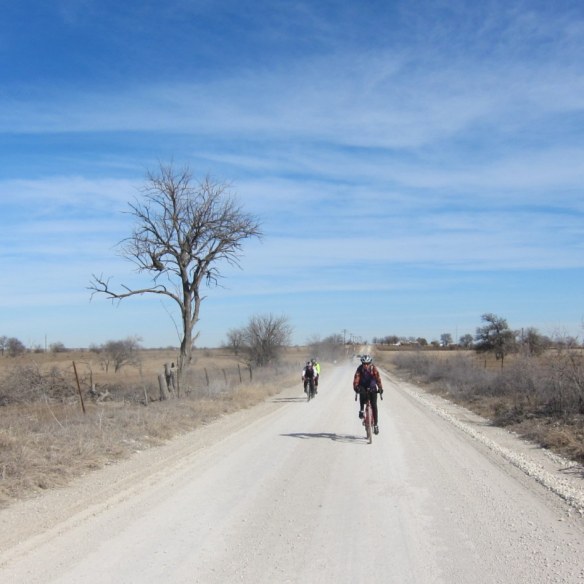 It was in my normal riding territory, but included a section that I hadn’t seen before. 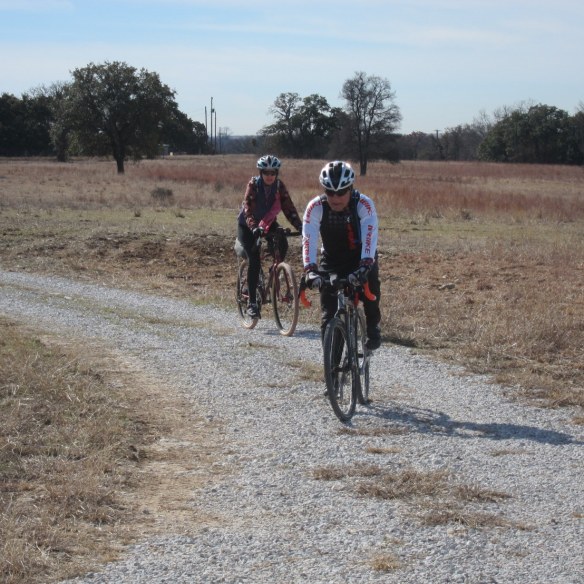 I seem to have no ability to ride past this barn without snapping a photo.

Big shady trees in some places, and big, wide-open and windy treeless hilltops in others.

We don’t have anything like mountains around here, but if you ride west of my house the land does get a little more bumpy.

So a little more climbing today than I’ve done in months.

For Peter who requested photos of Texas longhorn cattle. I’m not sure this one qualifies, but it was the best candidate in today’s ride.

When you have an outing with friends on this kind of terrain, you’ve had a good day.

I think she is ALWAYS smiling. 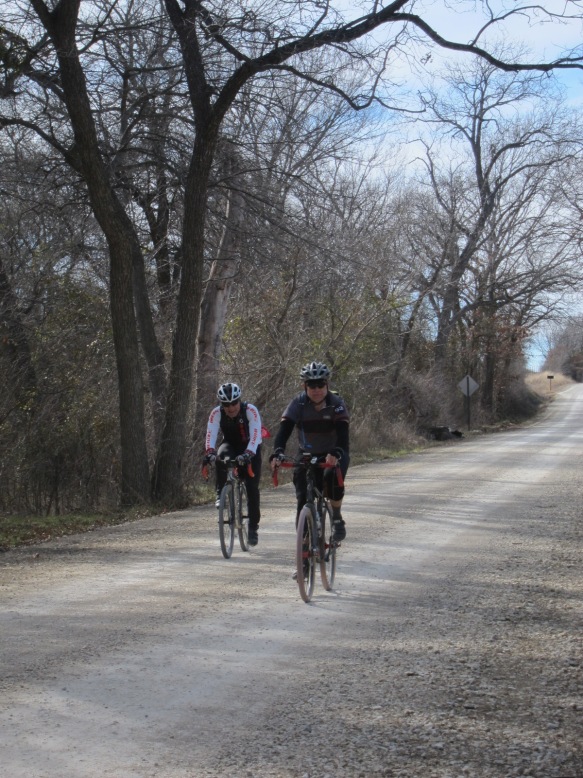 I think it was somewhere along here where I pondered how early I’d need to get started to survive this route in the summer. Would an hour and a half before sunrise be sufficient? 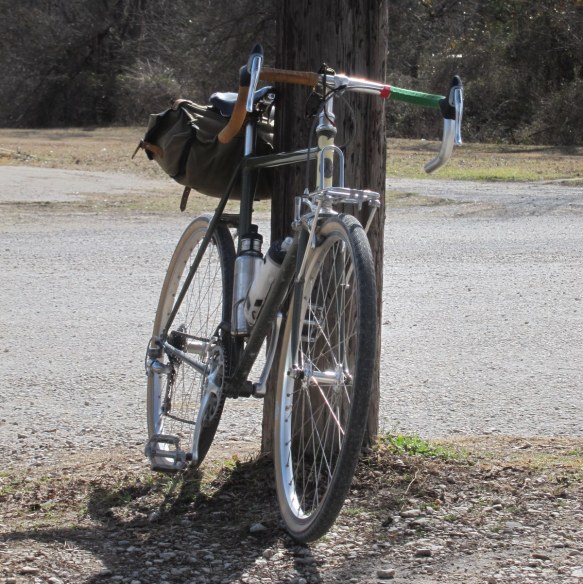 It felt good to be back on the drops again. But that interim scrap tape job is a bit unsightly. Hopefully, I’ll get some fresh tape soon. 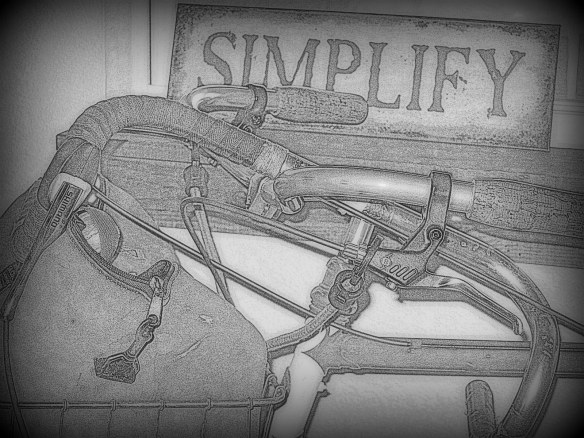 Oh no…I might have been too quick to praise the albatross bar. This realization is a huge disappointment. Even typing it was a bit difficult and, after my recent glowing review post, a little embarrassing. I’ve been enjoying the bar change immensely, but it is possible that my three-month adventure with albatross bars could end soon. Unfortunately, there just might be a correlation between some of my recent upper back/shoulder issues and the bar change.

I’ve had an upper back/neck/shoulder condition for years. It has been annoying, but manageable. Good posture seems to help, and bad posture seems to make it flare up. I won’t bore you further with my physical analysis. The point is that I just realized that I’ve had more flare-ups lately and they seem to happen after spending several hours on the bike. In the past (when I used drop bars), a ride would sometimes improve my situation. Since the upright position has been so much fun, and I haven’t been uncomfortable on the bike, I haven’t (before now) associated my recent issues with a bar change. This realization is an unwelcome surprise, and I’m not sure what to do next.

My guess is that adding core strength and upper body strength would help significantly. Improved fitness might be an effective solution for the long term, and it would certainly be a good thing for overall good health. Returning to drop bars, however, would likely (if my analysis is correct) provide more immediate benefits. Since my drop bars were not really a ‘problem’ anyway, maybe the best plan is a ‘combo’. I’ll be pondering my alternatives.

If you happen to notice that green dusty bike leaning against barbed wire fences has drop bars, you’ll know why. It’ll have nothing to do with the look or ride quality of the albatross bar, and everything to do with what seems to be a cumulative disagreement between my recently new ride position and my bad posture and poor fitness.

Who knows? Maybe my body, over decades, has adapted to the shape of a drop bar bicycle. There certainly are worse things than that.

The destination was an abandoned steel truss and wooden deck bridge a couple of hours away. It was about 30 feet over the creek bottom, and there was a beaver dam just upstream. The ponded water was iced over, but I was able to watch and hear the creek trickle along downstream from my sitting spot. 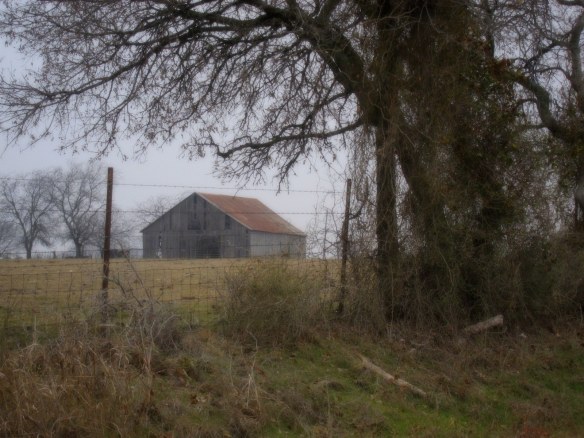 It was cold, breezy, humid, and foggy. The sky was grey and the thousand-shades-of-brown were muted. Oddly the grey and brown almost seemed to run together. All was subdued and other-wordly. 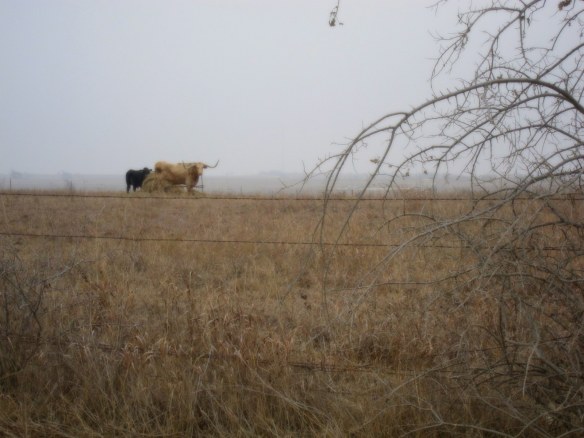 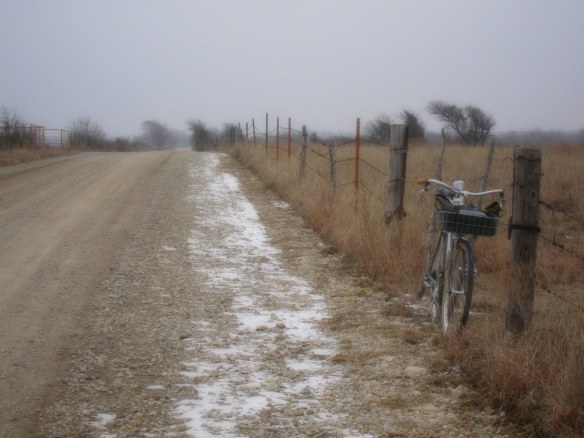 The numerous small patches of bright white snow, and the laser-like flashes of red birds darting in front of my path stood out prominently against the hazy backdrop.

A prominent landmark (for me) was discovered, like a water starved flower, wilted to the ground.

We don’t normally have the opportunity to see icicles that are taller than me. But this one indicates that the name ‘Dripping Springs’ is appropriate for this place.

In the recent moist conditions, most of the roads had swallowed the last application of gravel. They were a little bumpy, but otherwise smooth and fast. Well, fast for someone. 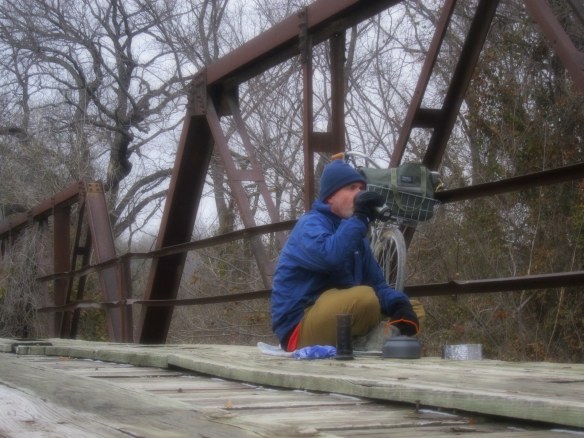 The abandoned bridge location proved to be as good as I had hoped. It was a lovely view and delightfully quiet. This is a good place to bring a friend.

On the return leg, some of the red color in the grass caught my eye. Then it seemed I noticed it almost constantly. We have some pretty colors in the dead of winter. I like to call it a-thousand-shades-of-brown, which is a phrase borrowed from a friend, but it really is more than that. 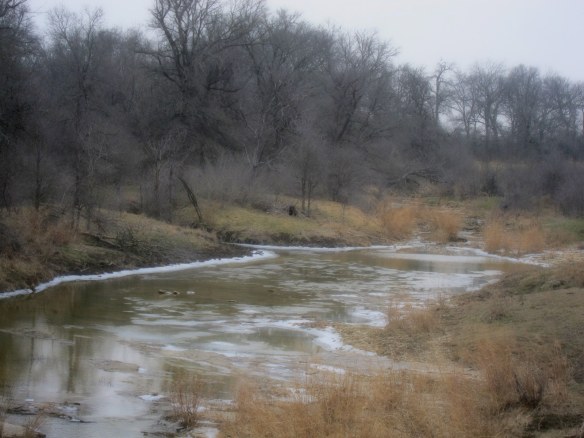 I wonder if my bail-out from last weekend resulted in a more rewarding outing today. I realize if things don’t work out just the way I want, sometimes, with a little time and patience, they can work out even better than I could have imagined. This is a classic example why I love me a good micro-tour.

After last Saturday’s bail-out, there has been an entire week of gravel ramble craving. Since most of my rides are Saturday outings, I often go several consecutive days with no ride at all. The anticipation of each Saturday morning is pleasurable and an important part of the bicycling experience. But the missed opportunity from last weekend still haunts me, and I’ve been anticipating tomorrow even more than usual. Uncertainty lingers, and I wonder if I’ll be able to finally follow-through with my plan.

Turning my glance to the corner of the room, I see my bike leaning against the window. It appears more ready than me, impatiently still. I find my camera and charge the battery. Then I rummage through my bag to make sure my coffee gear inventory is still complete. It’s like a light appetizer before a hearty meal. Stepping through the mental checklist and handling each impliment, is temporarily satisfying while focusing the appetite.

I keep checking the weather forecast, and search for more resolve with each deteriorating report.

My typical winter outings are in warmer weather. I wonder if I can find a clothing combination right for the temperature, wind, humidity, plus my variation of effort from climbing with a load to sitting still waiting for water to boil. Figuring that it is indeed feasible, my preparations are complete, and I can now turn my attention to the remainder of the evening.

But I go get my clothes anyway, and lay them out neatly in the order I’ll dress in the morning. Because by now, I’m nearly salivating.

For a while there, I wondered if blogging, and blog readers would disappear. As things become more and more instant, and more brief, I wondered if our attention span would shrink to the point at which we wouldn’t have time to bother with books or blogs. Maybe the world would go the way of facebook, twitter, and instagram. I pondered abandoning this blog and moving my attempts at a creative outlet to instagram. Then I received an inquiry from someone who has a REAL blog.

Mary from chasing mailboxes d.c. contacted me to see if I’d be interested in answering a few interview questions. That was the inquiry, and that expression of interest was plenty encouraging all by itself. It is always uplifting to have someone you respect as having more talent and skill paying attention to your own feeble efforts. So I responded with enthusiasm, and she posted the interview HERE. Then I learned there was an even greater encouragement yet to come.

Mary did a series of interviews. What I learned is that there are several really talented and interesting bloggers out there I had not yet found. I’ve been reminded that blogs are not disappearing. More instant and brief options are available, but there remain people who observe, contemplate, and share more thoroughly. So my perspective on blogging has been refreshed. Seeing the work of these (new to me) fellow bloggers challenges me to learn how to improve my posts. I have many fine examples to follow.

So thank you, Mary, for the inquiry and interview. And thank you Annie who also recently posted about some new blogs she has found on anniebikes. If you enjoy blogs with cycling content, I suggest you take a look at some of the options provided. You might find something new to enjoy, or a little encouragement.

The original plan was brilliant. I had an excellent micro-tour coffee brew-up site in mind. Noting the weather forecast, I could select my route and pace my progress just right. The winds would be transitioning from SW to NW through the morning. I could have the magic of tailwinds for almost my entire outing. One last check of the forecast before bedtime confirmed that I’d be blog-bragging about my brilliance the next day.

But you can’t trust the weather man. The wind shifted at least 5 hours too early, and the temperature when I woke was about 15 degrees colder than predicted. It was windy, humid, and chilly. This was the beginning of plan disentegration.

My inability to mentally adjust to the new conditions was the plan’s final undoing. I rolled out, got cold, came home, added a layer, rolled out again, pondered how I’d feel after being out in the wind for 4-5 hours in an area with no services, thought about how nice it would be to have coffee NOW, and headed back home. It wasn’t supposed to be this way, but I just couldn’t let go of the perfectness of last evening’s plan. So I bailed.

It took a few hours before the mental adjustment was finally made. But the opportunity was gone. I did actually manage to get out for a shorter ride in the afternoon, but the conditions weren’t really significantly better. I had let a bigger opportunity pass me by simply because it wasn’t what I imagined, planned, or expected. So instead of crisp color photos of outdoor coffee brewing, you get a gloomy black and white of me pondering what could have been. Bad Pondero.

There’s a lesson for life in there somewhere. Find it.