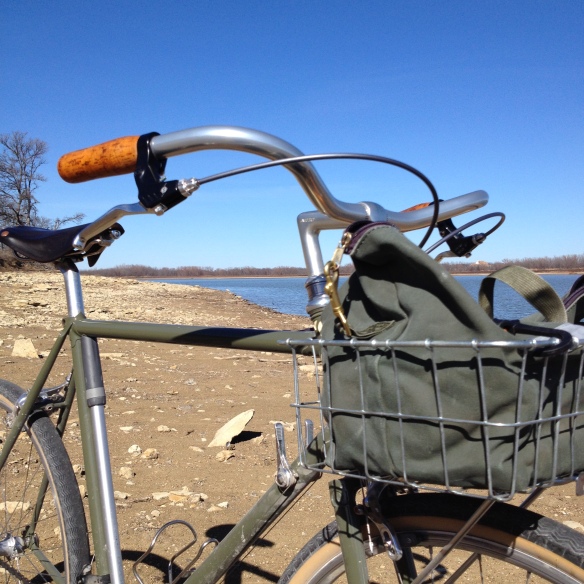 Did they really change your life?

Well…not really. But here’s a post on my albatross bar conversion. There are two reasons for this post. First, I’ve been asked to comment on this and I’m always happy to provide requested information. Answering questions gives me confidence that I’ll have a least one person who’ll read (or at least look at) the results of my efforts. The second reason is that I’ve been wanting to describe my impressions anyway. I just haven’t been ready, until now, to do so.

The title is a hint as to why I haven’t been ready to write on this subject. Everything I had to say would have been gushing with the over-dramatic. So let me give a more controlled bottom line impression. I am enjoying the new bars very much. More details are provided below.

Why change from drop bars to albatross bars?

For me, it had  nothing to do with solving any kind of problem, or making any kind of change of use of my A. Homer Hilsen. I’ve been comfortable on drop bars for decades, especially the Nitto Noodles with the flat ramps. I plan to do the same kind of rides, carry the same kind of loads, and pedal the same terrain as always. So if things are good, where is the motivation? I confess that I sometimes make decisions on nothing but looks. I saw photos of Rivendell bicycles set-up with albatross bars and thought (as Grant has opined) that the albatross might be the prettiest handlebar out there. In fact, I installed these bars several times, trying to force myself to like them unsuccessfully before this time. Just because I like the way they look.

Why was my conversion successful this time?

I think there were two reasons for ultimate success. The first reason is a change in configuration. Originally, I had followed suggestions to install a longer stem to counter the dramatic sweep-back of the bar. But, for me, that resulted in a back angle and pressure on my palms that I just couldn’t live with. For some reason, I decided to try the same stem I used with my drop bars, and that resulted (as hoped) in the celebrated sit-more-upright position that I imagined, and put less weight on my palms. To my delight, it did not pose a bar-to-knee clearance problem when turning. The second reason for success is probably allowing for some adjustment time. The sit-up-and-see advantage was immediately apparent, but there is no denying that my hands didn’t have their usual, ingrained-over-decades, familiar positioning. My hands didn’t just drape over the bar in a way that felt ‘right’. But after only a few hours, I adapted to a few new ‘usual’ positions and discovered numerable alternate positons. Now the oddness has disappeared, leaving me with the wonderful benefits normally ascribed to these bars…fantastic vision, comfort, and a variety of hand positions. Oh yeah, and handsomeness.

So are there any drawbacks?

Not for me. One reason I didn’t make the conversion earlier is that I imagined myself as a serious/performance cyclist. I wanted to be taken seriously and I wanted to be able to travel long distances, carry touring loads, and turn on the speed occasionally. Don’t people who do those things use drop bars, right? I’m finally mature enough to recognize that I’m not what people who consider themselves to be serious/performance cyclists are by a long shot…and nobody takes me seriously. There is no question that sitting more upright results in more wind resistance. But at my pokey speeds, it isn’t very much. Sometimes it seems like I’m riding slower, but I look down and see myself pedaling the same gears with the same cadence as always. Maybe it seems slower because my body position is less ‘aggresive’…or maybe because my line of sight is farther down the road. In a strong headwind, I’ll bet I ride slower. But it’s been years since I’ve associated speed with performance. These days I associate performance…with fun…and fun is the conclusion of the matter for me.

So are albatross bars fun?

Oh yeah. To me drop bars look like ram’s horns and usually result in a more aggresive riding position. Albatross bars look like wings and usually result in a relaxed, casual position that feels more like flying. The additional width, along with the greater separation between middle-aged-belly and knees, helps open up my breathing system. For my cyclotourist style of riding, the greater ability to visiually soak in my surroundings adds significantly to my enjoyment. It seems to me that these bars feel and look more like a better match with the kind of riding I’ve been doing for the last 7-8 years. After selling my custom ti race bike…returning to steel, switching to wider tires, trading clipless for platform pedals, and adding racks, bags, and a liberal amount of personal comforts for a day’s outing, maybe the switch from drops to albatross bars is the last step in putting that old racing mentality out of my life.

Maybe albatross bars didn’t really change my life, but they did make one of the enjoyable things in my life more enjoyable.

34 thoughts on “How Albatross Bars Changed My Life”