It was an overcast, misty, NE breezy, 49 degrees when I rolled out after work. The forecast said 30 percent chance of scattered showers for Friday night and Saturday morning. For those of us in north Texas, the 3 year drought-learned response to a weather forecast like that is… 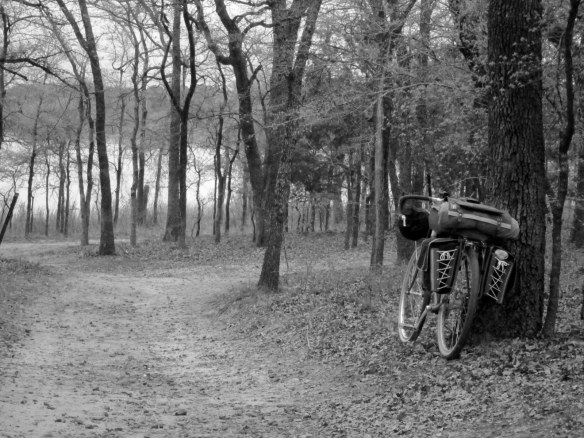 Riding out to the camp site was a little head-windy, but pleasant. Apparently, I nailed the clothing selection.

I arrived at the site just a little before sundown. With the heavy overcast skies, I was rapidly losing light. So, while I could still see, I set about diligently setting up camp.  I scoffed at the short-lived sprinkling rain.

Sleeping quarters were established just as it was almost too dark for a no-flash photo.  With weather protection in place, I turned my attention to campfire contentment and dinner.

Maybe I was just in a nicely protected area. But it seemed like the wind relaxed just like I did as time passed. Food and wood was consumed. Dinner walked a pace just right for shifty tongues of flame and flickering light. Coyotes kicked up a ruckus, and I thought I’d hear them all night. But they suddenly became suspiciously silent.

When the food was gone, the flames shrunk in size and my eyelids dropped.  With the cloud cover the temperature had only dropped to 46 degrees. I had packed well, and would be quite comfortable.  It was a good night in the woods.

Rain woke me at 5:30am. It was a light rain, I was comfortable, and I figured like last night this little shower would quickly pass. It only took a minute to drift back to sleep.

At 6:30am, I woke again. It was still raining…and harder. So I pulled out my phone to look at the weather radar.  Manipulating the little device from the warmth of my bag, I thought about the irony of such technology pressed to service while laying on the ground. Rain was everywhere, and some of it heavy. It was clear there would be no avoidance. I’d run out of food before I’d run out of rain. No lazy camp coffee sippin’ today. There was nothing to do but face the elements.

In the pre-dawn darkness, gear was packed-up wet. I cinched up the pull cord on the hood of my jacket, and set off for another hour and a half riding in the chilly wetness back home. With the rain dripping off my nose, I knew I’d look back to this moment on those dry, dusty, 100+ degree days, and I’d be glad for the experience.