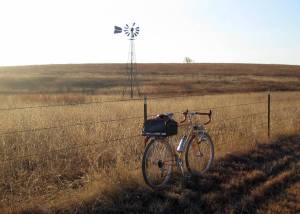 I must come clean. Forester Road has gone neglected. In my wonderings and ramblings across the north Texas prairie, I’ve somehow missed the Forester Road vicinity. I understand that you expect me to keep up with things around here. So this morning’s reconn was an attempt at catching up.

It’s not a long road. But it has that delightful mix of hilltop open prairie with shade tree creek bottom. So I can have a nice variety within a short ride from the house. Why have I been away so long? 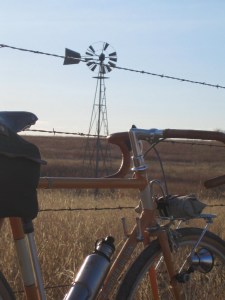 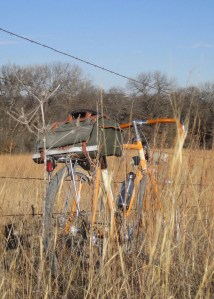 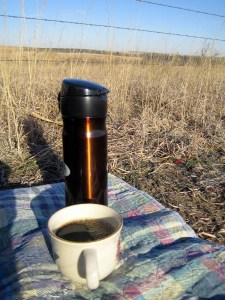 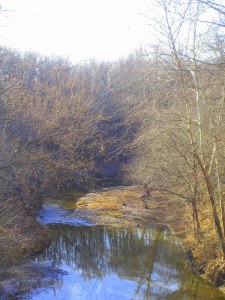 Country Bike
I don’t know if Rivendell’s Grant Petersen has ever been to rural north Texas, but sometimes it seems like he was personally thinking of me when he created the A. Homer Hilsen. The perfect Forester Road reconn machine.
Well, it seems that everything is in order along Forester Road. I hope you feel better now. I know I do. 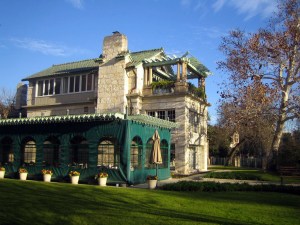 There are worse places to be in January.
Due to business travel, I haven’t really been able to get out on the bicycle lately. But breakfast at the historic Guenther House eased my suffering some. Located on the bank of the San Antonio River, I noticed that the fabulous Riverwalk is being extended further south to connect with the Mission Reach project already under construction. More of a good thing. Good for San Antonio.

Across the street, and also on the river bank, is the Blue Star Arts Complex, which has several interesting things to see. The new colors on the restored structures struck a stark contrast with the brilliant blue winter sky.

Unfortunately, since I was here at breakfast time, I was not able to go into some of the galleries and admire the artists’ work. Maybe next time.

There was a bike shop nestled in among the other renovated buildings. 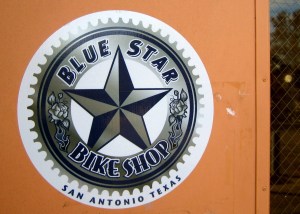 They call it the Blue Star Bike Shop, no less. 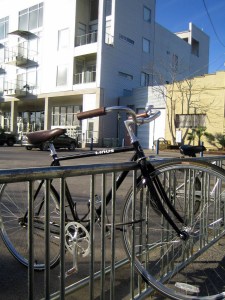 There’s plenty of bicycle parking, and a several cyclist’s were making use of a path along the river. Some appeared to be in routine morning commute mode.

Then there was this other automobile alternative to admire.
So, no rambling country bike ride story today. Simply a stroll through the Blue Star area of downtown San Antonio. A charming area to wander through, or simply sit and watch the river roll by. Kinda like Portland in cowboy boots. 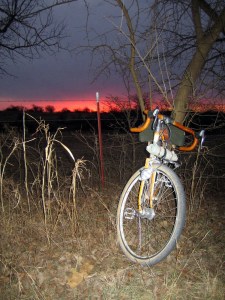 So, sometimes slower is better. Especially with an early start. Rolling out the door to sense the morning peace, is like straining eyes to see over the next ridge. A breeze only just beginning to stir. Geese honking overhead, descending through a grey sky to a pond of grey water. The bicycle glides at a perfect pace with morning unfolding before it.

But there is also arriving. Because a place gives wandering purpose. A place nearby is like a neighbor. And a place set aside, is like a listening friend. How sad to travel for distance sake and pass him on the way.

When pausing mid-ride today to admire my surroundings, I remembered a conversation from the movie, “The Last Brickmaker in America”. After a construction project manager says he can get bricks “faster and cheaper” from another source, craftsman Henry Cobb (Sidney Poitier) counters that he prefers “slower and better”.
What was it that reminded me of that conversation? I’ll give you a hint. It wasn’t bricks.

Because all the cool kids ride their bikes in the snow, I needed to try it myself. There have been a prolific number of bicycle-related blog posts, since about October, showing all you tough guys out in the elements. You describe the horrific conditions you endure like some kind of badge of honor. You show close-ups of your studded tires and ice hanging off your drive train. I comment on your blogs and express how impressed I am, and how I respect your machismo. And I tell all my non-cycling friends what kind of pathetic freaks you are.

So it snowed a little down here on Sunday. The temperature hasn’t been above freezing since. I know what you are thinking. Why did it take me so long to get this post up? We’ll actually, today was the first day to get out on the bicycle. I’m sorry. I was busy. I had a lot of laying around by a warm fire, under a blanket, with a book kind-of things to do.

But the wind died down this afternoon, so I figured I’d go out and see what the big fuss was about. But it was just cold. Which is what I figured. But now I’ve got pictures of my bike posed in the snow just like the cool kids. Well, except that the snow is only about two inches deep. And I guess the temperature was still a positive, two digit number. But there WAS snow for crying out loud, and I could see my breath out there. So I think it was borderline epic.
Oh yeah, one more thing. The forecast is for a low of about 14F tonight. I’d really like to get out tomorrow morning and commute the twenty miles to my office. Too bad I’ve got to drive to Houston tomorrow…cuz you know…I’d SO be out there.

It started, I suppose, as an idea drifting along and snatched out of a stream of thoughts. The idea was to mix a recipe of some of my favorite things to see what would happen. To my usual mix of early morning gravel, micro-tour intentions, and a lonely hilltop, I added one of my best friends.

When he agreed to meet at my house in the no-moon darkness, ride for about an hour in the chilly air, and watch a sunrise, I decided to make a few preparations. A little time invested on Friday night makes a Saturday morning outing more enjoyable. My trips are relatively short, so I guess I’m more about “ultra-luxury” than “ultra-light”.

Because the sky was so clear, the hills had a warm golden glow even before the sun climbed above the ridgeline six miles away.

And when the sun did appear, the glow turned into warmth for body and mind.

We found a large flat rock for seating, enjoyed homemade scones and coffee, asked hard questions, and listened to conspicuous silence. I’m not sure Michael will become a micro-tour fanatic, but he seemed reasonably content. It is good to have friends willing to occasionally participate in my odd ways. 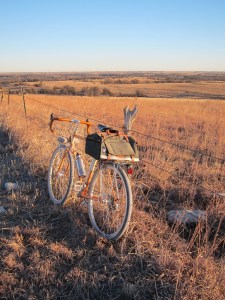 We took in the view with gratitude for the opportunity, and for the bicycle which makes such excursions more pleasant. 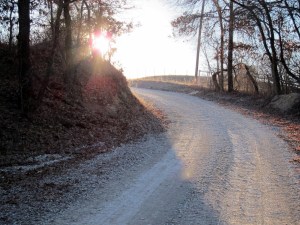 As we rode back home with the sun in our faces, it occurred to me that mixing a good friend into my morning micro-tour makes for a tasty recipe. Thank you, Michael. 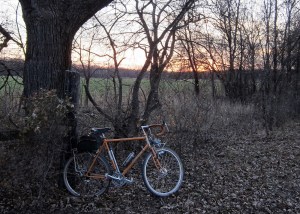 A bicycle rolls down into the valley, and from rough pavement to a gravel road. A stiff wind lays down, replaced by silent stillness. A sun’s warmth is overcome by a crisp chill. A blue winter sky turns grey, then darker yet. A man’s workday pace relaxes into dawdling. And the bicycle climbs out of the valley, behind a small beam of light, as darkness covers everything like a blanket.
Sometimes you can be riding along in a familiar area, with brain in neutral, just spinning a rhythm. Then some sort of visual signal from your periphery makes it through the fog.
Whoa…wait a minute. What was that? 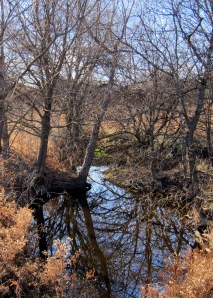 So you turn around and take a look. And sometimes, it’s a nice enough view that you pause and think maybe this would be a good place for a little refreshment.