The business trip would continue, but not before a morning ride. Since the hotel is close to the capital building, let’s start at the beginning with an early morning view. On the far left, the proud flag of the Lone Star State is already doing its job. 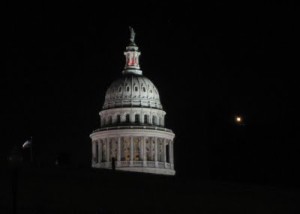 After a little breakfast, I practically coasted down to Town Lake. Then I turned right to 4th and Nueces, because I guess cyclists visiting Austin just ought to go visit Mellow Johnny’s. I was surprised at the high-brow autos parked out back. 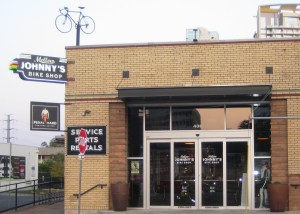 As long as I stopped by to look, I figured I might as well play with a couple of “reflection” shots. One as a self-portrait, and… 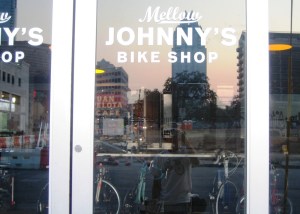 …one to simply show the in-house coffee shop and early morning surroundings. 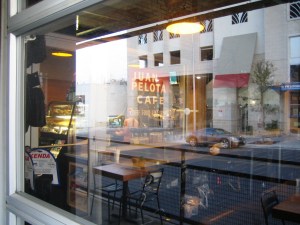 Then it was off to the Shoal Creek Greenbelt. 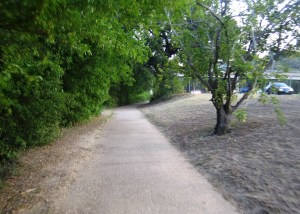 I enjoyed looking back over my shoulder at the folks driving TO work while I was headed AWAY from downtown. 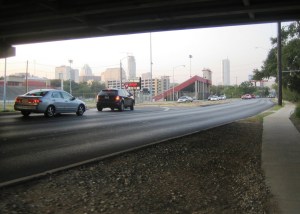 Then the paved trail became gravel and the traffic noise disappeared. 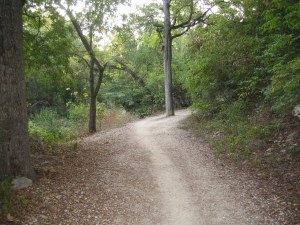 And some of the rocky terrain made itself evident. That last overhang shown here forced a fairly low duck on my part. Must be a challenge for some of you tall guys. 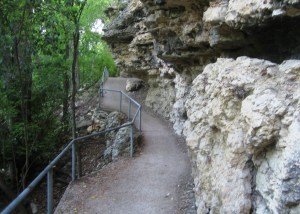 It wasn’t long before I popped out of the trail and began crusing up Shoal Creek Blvd. with its nice, wide bike lane on both sides of the road. 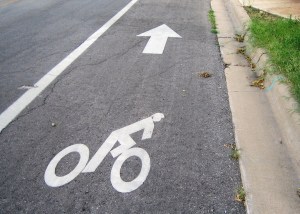 Not only are the bike lanes wide, but the auto traffic is moving slowly. It seems autos and bikes coexist here fairly well. Well, they did today at least. 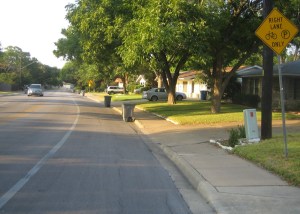 The return trip was pretty much the same route in reverse until I reached the downtown area. Since I took a few different roads, I saw this BMX course for the first time. It least I assume that is what it is. Although I’ve flown Schwinn Stingrays pretty far, and pretty high, back in the day, this park appeared a little too intense for this geezer. 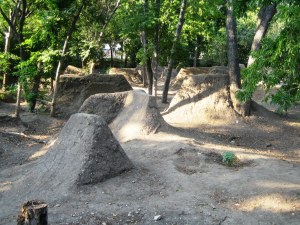 Finally, it was back uphill to the hotel. This time I cruised straight up Congress, through the capital grounds, and back to the hotel. 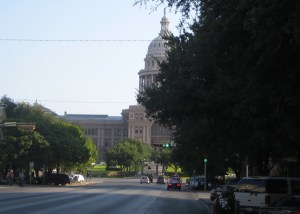 With a nice 2-plus hour ride behind me, I entered the work day with a good attitude.